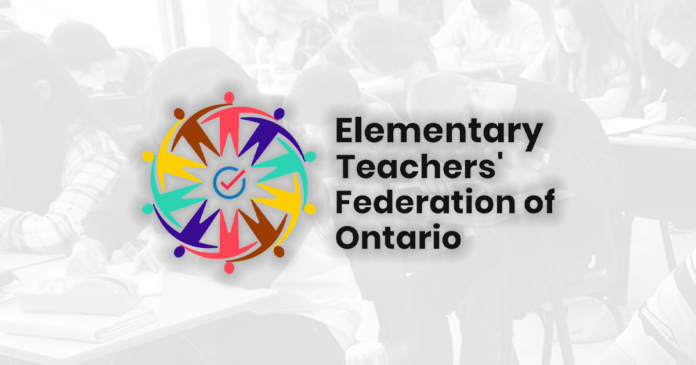 Ontario’s largest teachers union has created a series of lesson plans for the fall term that are intended to help students identify “white privilege” and how it’s used to oppress people of colour.

The 83,000-member Elementary Teachers Federation of Ontario (ETFO) has geared this curriculum plan to Grades 7 and 8 students.

Named “Who’s Got the Power,” the curriculum plan equates “male and white privilege” – describing privilege as the “values of society that Whites receive…by virtue of their skin colour in a racist society.”


The ETFO lesson plan proposes that students be asked to provide three examples of the Best Person in the World, a list to be compiled on a blackboard. Following that, the teacher is asked to underline all the men named in one colour and all the white people in another colour.

Students are then asked if the people on the board are wealthy (and have power). If racialized people are named, the teacher is told to identify whether they are in stereotypical fields like black men who play basketball or who are rappers.

I had to look up several of the names listed because they weren’t readily familiar. I can only imagine how little most Grade 7 and 8 students would know about these activists and artists.

Surely to goodness, there are plenty of people of colour who are successful for a variety of other reasons besides their activism.

But it is all so predictable.

ETFO, which was headed for many years by radical leftist Sam Hammond, has repeatedly perceived its mandate as a commitment to “social justice, equity and inclusion.” It has been vehemently opposed to standardized testing coordinated by the Education, Quality and Accountability Office (EQAO) or any kind of assessment that might show the school system is failing students.

The new president, Karen Brown, while not as vocal as Hammond, tweets extensively about social justice issues, anti-black racism, Indigenous concerns and Pride. Brown, a Toronto teacher and NDP supporter, also made certain her followers knew to vote for all teachers running on the NDP ticket in the June provincial election.

“Given the legacy and current prevalence of anti-Black racism in colonial systems, institutions and society that groups like Black Live Matters have brought to light, ETFO is committed to creating policies, professional learning and curriculum resources that protect and support the equality and rights of Black people,” the union says on its website.

The lesson plans suggest that once diverse people are selected – according to the guidelines provided by ETFO – teachers read questions to students pertaining to their privilege.

The “White Privilege” checklist which follows is proposed by Peggy McIntosh, an 87-year-old American anti-racism activist and feminist who wrote a book on white privilege.

The Peggy McIntosh checklist starts on pg 17 of the curriculum document.

The final task in this outrageous social justice experiment asks students to find a person (living or dead) and create an “action figure” of this person either digitally or by hand.

They are expected to present the action figure to the class by creating an advertisement for the figure. The document suggests finding someone who is part of a group that “privilege overlooks” such as a person who uses a wheelchair and is an Olympic basketball player.

ETFO has long been dedicated to issues that have absolutely nothing to do with student success or the quality of classroom teaching.

But this has to be one of the most pathetic and weirdest exercises they’ve produced in a long time.

It is yet another blueprint that has come straight out of the Critical Race Theory playbook.

It isn’t much of a stretch to suggest ETFO has completely lost its way as a union representing Ontario teachers.

Along with their “woke” trustee friends on several Ontario school boards, ETFO has also been an instrumental player in the move to use the province’s students as pawns in a dangerous social experiment gone wrong.