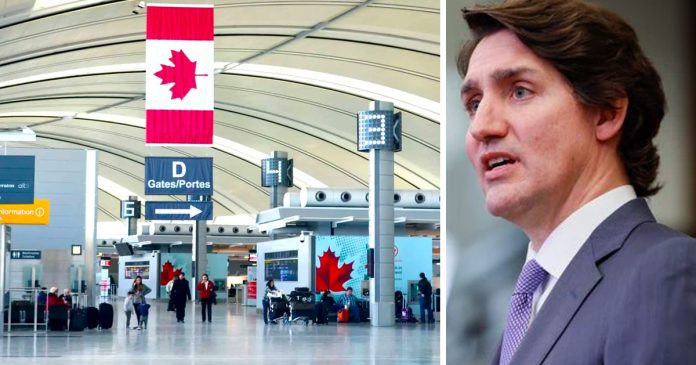 Despite the ongoing massive delays at Canada’s airports, the Trudeau government is resuming mandatory random testing for those entering Canada as of July 19, 2022.

According to a statement Thursday by Health Canada, fully vaccinated travellers who have been vaccinated for at least 14 days prior to arriving in Canada may be required to produce a negative Covid test. Testing will be completed outside of airports either in an in-person appointment or self swab test.

Travellers who are not fully vaccinated must continue to test on Day 1 and Day 8 of their 14 day quarantine unless they are exempt.

“We need to keep border testing measures in place because that is how we track importation of the Covid-19 virus, and of new variants of concern. We will keep adapting our border measures to balance the need to protect Canadians while supporting our economic recovery.” said Minister of Health Jean-Yves Duclos.

Air travellers who are fully vaccinated and selected for mandatory random testing can expect an email notification within 15 minutes of completing their customs declaration.

Unvaccinated travellers can complete their tests by virtual appointment or in-person at select pharmacies while respecting their quarantine requirements.

“As demand for travel increases across the world, today’s announcement marks an important step in our progress to streamline testing processes outside our airports while preventing the further spread of Covid-19,” said Minister of Transport Omar Alghabra. “The Government of Canada will continue to protect travellers and employees and ensure our transportation system is safe, reliable, and resilient for the long term.”

All travellers must continue to use the ArriveCAN app in order to provide the mandatory travel information within 72 hours before their arrival in Canada.

If a traveller’s arrival test is positive, they must go into isolation for 10 days from the date of the test. 10 days is the federal standard and travellers must be isolated during this time even if the requirement is shorter in their own province.

The program was originally paused on June 11 in order to aid massive delays experienced at airports.

In recent weeks, travellers have reported delayed flights, cancelled flights  and long lines at Canada’s airports. As reported by the Daily Hive, 54% of outbound flights from Toronto Pearson international airport were delayed Monday, making it the airport with the most delayed flights in the world.

A Leger poll conducted between July 8 and 10 with the Association for Canadian Studies (ACS) published in the Canadian Press saw 53% of Canadians concerned about the delays plaguing airports, including cancelled flights and long lines.

The poll also found that 18% of Canadians have significantly modified their summer travel plans due to airport delays, as well as issues with obtaining passports.