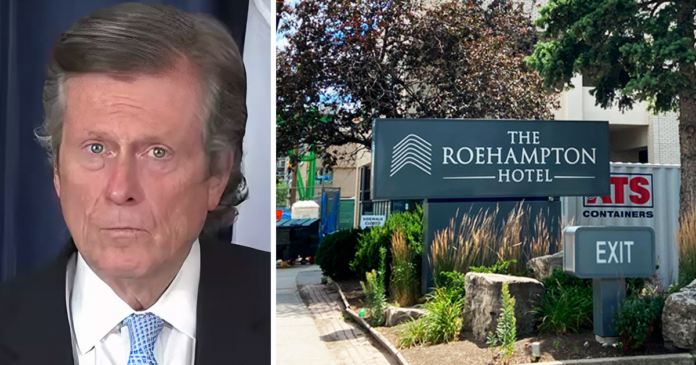 The city of Toronto’s controversial plan to dump the homeless in three-star hotels during Covid was supposed to be a temporary measure only.

It was sold to Torontonians as a way of socially distancing the homeless during the pandemic and of providing those who were squatting in downtown parks a roof over their heads. But now more than two years later, the homeless hotels are still operating, many with a phalanx of security guards 24/7 to try to keep the residents from wreaking havoc on the surrounding neighbourhood.

In April, council quietly approved extensions to all of the hotels to next spring.

A significant number of residents in these homeless hotels are addicted to hard drugs and have mental health issues — but instead of receiving the counselling and support they so desperately need, are left to roam the neighbourhoods where they are located day and night.

One such homeless hotel is the Roehampton on Mt. Pleasant at Eglinton, which opened in July of 2020 to the surprise of this once quiet family neighbourhood.

It’s lease, which was supposed to end in May, has now been extended at least until November and potentially until next April 30.

The initial negotiations for this hotel were handled secretively and in the three months following its opening, crime had skyrocketed in the vicinity of the shelter.

Police statistics showed that crime in the surrounding neighbourhood had jumped 30% compared to the summer before.

The Yonge-Eglinton and Mt. Pleasant East neighbourhoods — those two were most drastically impacted by the hotel shelter—saw increases in all major crime indicators except assaults compared to the summer before. The city responded by beefing up police presence around the shelter.

Two summers later, the crime appears to have moved to the Yonge-Eglinton neighbourhood where the homeless are able to blend in with the crowd. Reports of attacks, assaults and dangerous offenders with weapons are posted almost daily on the Community Safety Midtown Facebook page, which was started up when the Roehampton shelter first opened.

The Yonge-Eglinton neighbourhood, once known as Yonge and Eligible, is no longer single-friendly. It has completely changed.

Recently resident Melissa Cutler spoke exclusively to True North, about why she’s stopped running outside and the kind of assaults she’s both witnessed and experienced.

Cutler, a chiropractor and tennis instructor, was assaulted in March by a homeless man, who looked to be high on drugs. The police did nothing.

Mayor John Tory and the councillor responsible for bringing the shelter to the neighbourhood, John Matlow, have been absolutely silent on the impact. In fact, residents report that Matlow has tried to bully those who have said it’s unsafe.