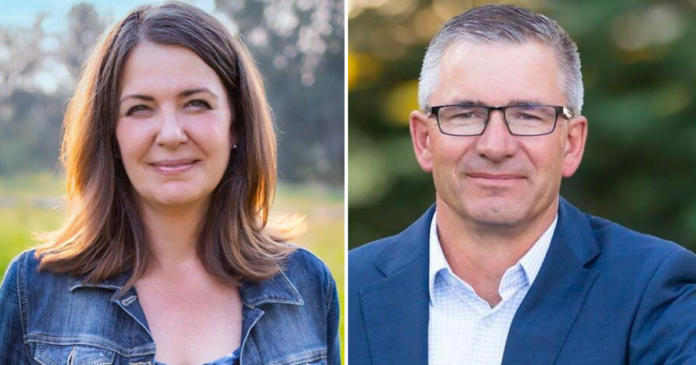 The United Conservative Party leadership race has been ongoing for over a month, and rivals to frontrunner Danielle Smith finally found an attack that sticks — that the former Opposition Wildrose leader would implement a Provincial Sales Tax (PST).

Former Finance minister Travis Toews, who according to one poll is about ten points behind Smith and Brian Jean, also a former Wildrose party leader, launched the social media attack on Saturday.

Toews pointed to a September 2020 op-ed Smith published in the Calgary Herald, in which she advocated for $5 billion in new taxes through a PST. Alberta “needs a financial reset,” Smith wrote at the time.

The province was facing a historic projected $24.2-billion deficit, a result of Covid-19 and low oil prices — projections which have rebounded in the face of soaring energy prices amid global sanctions on Russian oil. (The 2021-22 fiscal results show a $3.9 billion surplus, marking the largest fiscal turnaround in the province’s history.)

But Smith’s proposal was especially “egregious” because it came at a time when economic growth was absolutely critical, Toews said.

Smith has since walked back her calls for a PST. It’s unclear if she reversed her position at any point ahead of responding to Saturday’s attack. Her campaign didn’t respond to True North’s queries as such.

“Danielle Smith will not institute a PST as Premier – full stop,” campaign manager Matthew Altheim said in a statement to True North. “As a radio host and political commentator Danielle was known for having open discussions about all sorts of ideas. This is not one she will pursue as Albertans don’t support it.”

In her social media response, Smith noted Toews didn’t shut down speculation of a PST during his time as Finance minister.

“I hope we can agree that rather than smearing fellow candidates for past musings, we should focus on our ideas for today & move forward together,” Smith wrote. “I’m against a PST. I assume despite this article – you aren’t either?”

She was referencing Toews’s comments from November 2020. Just two months after the controversial Smith op-ed was published, the then-Finance minister told members of the Edmonton Chamber of Commerce he would consider looking at a provincial sales tax, but only after the pandemic and after further spending cuts.

“The timing is the question here,” Toews said. If the government were to examine the sales tax issue seriously, a revenue panel might come late in its four-year term which ends in 2023, he said, as reported by the Edmonton Journal.

Toews now says those comments were indicative only of his promise to propose a revenue panel before the end of his government’s term.

If the revenue panel recommended a PST, Toews said he would “not absolutely, not necessarily” bring it to his government for further recommendation.

“We appoint a panel in good faith and we say, ‘You know what, go to work and determine, you know, the most important, most efficient and appropriate revenue structure for the province,” he said. “I think that’s what we do, and then we wait for the panel report.”

It’s unclear what impact the attack ads will have on the Smith campaign, if any.

Smith appealed to supporters by pointing to the “negativity” of “Conservatives attacking each other.”

“Sadly, one of the establishment candidates has become desperate and has decided to smear our campaign today,” she wrote in a campaign email. “I won’t attack my fellow leadership candidates, but I will stand up when necessary.”