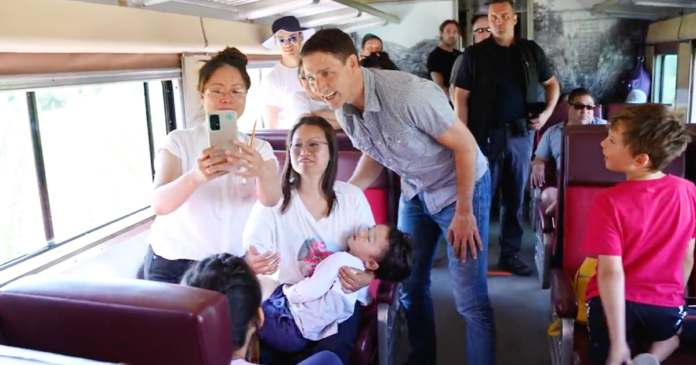 Prime Minister Justin Trudeau made a maskless appearance on a British Columbia train Monday while his government continues to mandate masks for commercial trains in Canada.

All passengers aged six and older who travel on federally regulated trains such as Via Rail are required to wear a mask at all times – except when eating, drinking or taking oral medication.

Despite his government’s own rules, during a visit to the central Okanagan region this week, Trudeau ditched his mask on the Kettle Valley Railway.

In a short video posted to Twitter, the maskless Prime Minister can be seen on board the train shaking hands and taking selfies with passengers.

It should be noted that tourist trains are not federally regulated and therefore, the government’s mask mandate does not apply. However, the Prime Minister still faced backlash for his hypocrisy.

Conservative Party health critic Michael Barrett said that “Trudeau is demonstrating it’s safe to not wear a mask on transportation like trains and planes.” He called on Trudeau to end his remaining mandates.

Meanwhile, others pointed out inconsistencies with the Prime Minister’s mask use. Trudeau wore a medical mask while visiting a Scarborough church days before his maskless train appearance.

This is not the first time Trudeau has been called out for his mask hypocrisy. He has also been seen ditching his mask while travelling overseas, including in October 2021 when he partied in the Netherlands with Dutch Prime Minister Mark Rutte.

At the time, all of Canada was under strict Covid mandates and restrictions, despite the country having a high vaccination rate.

The Canadian government is one of few in the western world that still mandates masks on trains. Other nations including the United States, England and France have opted to let passengers make their own choices when it comes to masking.

“Masks are an effective way of reducing transmission, especially in areas with restricted space, such as on board planes, trains or cruise ships,” said Alghabra on June 14.

Despite Alghabra’s push for continued masking, provinces have removed mask mandates for transit, meaning that passengers on commuter trains are not required to wear masks.