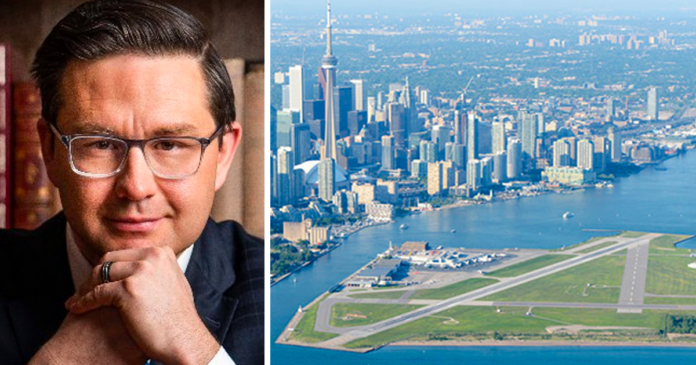 Conservative Party of Canada leadership candidate Pierre Poilievre has proposed reviving an expansion of Toronto’s Billy Bishop Airport to accommodate passenger jets, an initiative the Trudeau government scrapped upon their initial election in 2015.

The initial proposal from Porter Airlines asked the federal government and the City of Toronto for permission to extend the airport’s runway by 168 meters in both directions and allow the use of Bombardier CS100 jets.

In a press release, Poilievre says if he is elected prime minister, he will direct his minister of transportation to encourage Porter Airlines to re-table the proposal and encourage the Toronto city council as well as the Toronto Port Authority to approve the bid.

Poilievre claims that the airport would be able to accommodate an additional 2 million passengers per year while creating more jobs and tax revenue.

With Canada’s airports in a state of disarray, particularly at Toronto’s Pearson Airport, the Poilievre campaign asserts that an expansion of Billy Bishop can help to alleviate the chaos.

“Travel at Pearson is a mess right now”, said Poilievre.

In 2015, the Trudeau government scrapped the proposal as the tripartite agreement between the federal government, City of Toronto, and Toronto Port Authority cannot be revisited if one party refuses to amend the agreement.

“Of course, Trudeau sided with the gatekeepers who fought tooth and nail to stop it,” said Poilievre

“Let’s expand Billy Bishop Airport and open competition in a country where the sky’s the limit.”

With Canadians are experiencing some of the worst airport delays in the world, the Trudeau government has done little to mitigate the stress at Canada’s airports.

The Trudeau government created a cabinet committee to deliberate the delays, but the disorder at Canada’s airports has not improved, and it is not clear what the committee has done to help.