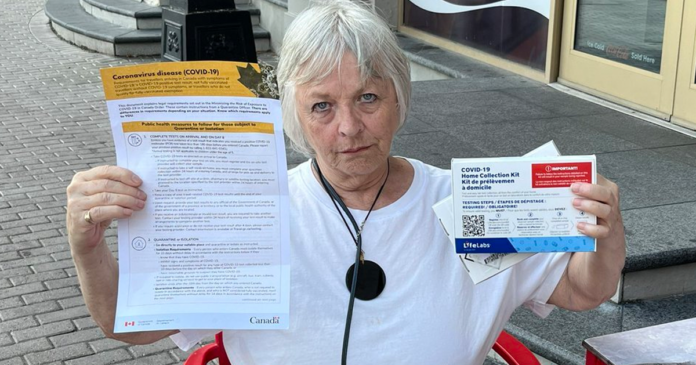 A fully vaccinated Canadian woman was ordered into a 14-day quarantine after she refused to use the Trudeau government’s ArriveCAN app, True North has learned.

71-year-old Joanne Walsh travelled to Niagara Falls, New York with a friend on July 19, 2022 for a few hours before returning to Ontario.

Walsh says she went to the Canadian land border in Niagara Falls with her passport and proof of Covid-19 vaccination. However, she did not use the ArriveCAN app.

She told True North she refused the ArriveCAN app mainly because she believes the Trudeau government’s policy unfairly targets seniors as many Canadian seniors currently do not own a cellular device.

According to the Government of Canada, non-compliance with the ArriveCAN requirement can also result in fines or enforcement, in addition to a quarantine order.

True North reached out to federal health minister Jean-Yves Duclos’ office for comment on Walsh’s story, but did not hear back in time for publication.

In a video obtained by True North, Walsh was told by a Canadian Border Services Agency (CBSA) officer that if she did not complete the ArriveCAN app, she would be subjected to a 14-day quarantine.

“I cannot obviously compel you to perform ArriveCAN if you refuse to do it, that is your choice,” a CBSA officer told Walsh. The officer added that “the current policy… is that we are supposed to issue you a quarantine order at that point.”

Despite Walsh’s proof of vaccination, CBSA insisted that she use the government app. “I shouldn’t have to go through this, no Canadian should. Just because I don’t want to put an app on my phone,” Walsh said in the video.

She was given a letter with information regarding the quarantine order, and two Covid-19 test kits.

Walsh asked the CBSA officer what would happen if she did not comply with the quarantine order. The CBSA officer said he was not sure, but added that the Public Health Agency of Canada could choose to have police monitor Walsh’s compliance.

“They (the police) are out there and about there, and generally speaking they tend to be the go-to for all the enforcement outside of a border crossing,” said the CBSA officer.

The 71-year-old told True North she expected to have some form of consequence for not complying with the ArriveCAN requirement but did not think she would be ordered to quarantine.

“I was in shock,” she said. “In my wildest dream, I wasn’t expecting a quarantine because I’m vaxxed.”

However, Walsh said she has no regrets regarding her refusal to use the ArriveCAN app.

Walsh is not the only Canadian who’s had issues with the federal government’s app. In another viral video posted to social media, authorities demanded that a quadruple vaccinated 86-year-old man who does not own a cellphone complete ArriveCAN.

The man was travelling with his daughter, Nancy Stempin. She said they threatened her family with a $5000 fine if she did not add her father’s information to her ArriveCAN app. According to the Western Standard, they ended up not being fined but were warned not to be in this situation again.

Many western countries have removed pandemic-related pre-entry requirements for travellers, but Canada is continuing to impose vaccine mandates and other restrictions at the border, including the mandatory ArriveCAN app.

The Trudeau government also recently announced overhauls to the app, so travellers can submit CBSA customs and immigration declarations prior to their arrival.

Current border mandates and restrictions are set to be in place until at least September 30.