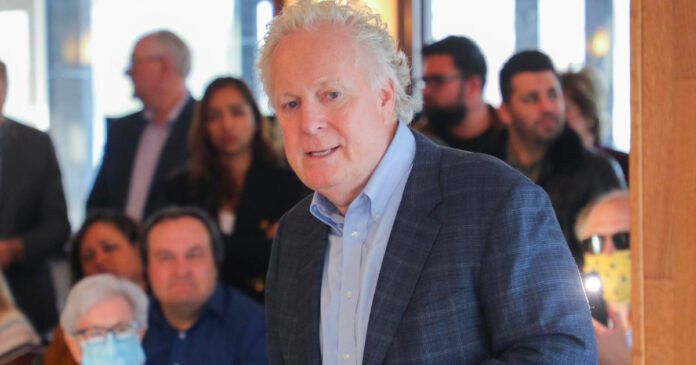 In the mailout, Charest took several jabs at his main rival Pierre Poilievre, and said that Prime Minister Justin Trudeau is counting on the Conservative Party to elect the Ottawa MP as its next leader.

Charest also called out a number of Poilievre’s policies and positions he finds “dangerous, unelectable, and divisive,” including a private members bill tabled by Poilievre that would ban federal Covid-19 vaccine mandates.

“He even tabled a bill that said he would stop the federal government from implementing steps to keep public sector workers safe in another pandemic,” wrote Charest.

“How will Conservatives ever win seats in Ottawa, where many public sector workers reside, with Pierre Poilievre pushing policies that threaten their health and safety?”

When asked by True North if Charest’s statement was an endorsement of vaccine mandates, campaign spokesperson Michelle Coates Mather pointed to a fireside chat hosted by the Western Standard – where the former Quebec premier dismissed vaccine mandates.

“I don’t think it works. Looking into the future… I don’t see how you can impose it [the vaccine] on everyone,” said Charest in Calgary on July 11.

Charest had also said that “there’s other ways of working around it and making sure that we do as much as we can so that people have the ability to choose to protect their health and protect those around them.”

True North also asked if Charest believed unvaccinated Canadians pose a risk to the vaccinated, to which Mather responded that “as of right now, it’s clear whether you are vaccinated or not, there’s a high probability you will catch covid. It’s also clear vaccines reduce severe illness.”

In the mailout, Charest also doubled down on his opposition to the Freedom Convoy.

He again accused Poilievre of “supporting the illegal blockades that shut down borders, hampered our economy, and blocked Ottawa residents from getting to their homes or workplaces.”

He also referred to convoy participants as “illegal blockaders” and claimed they laid siege to the city of Ottawa.

Charest also took aim at comments Poilievre made on The Jordan B. Peterson Podcast.

Poilievre told Peterson he was “a believer in using simple Anglo-Saxon words that strike right at the meaning that I’m trying to convey,” a comment which led to accusations of white supremacy from the left.

Charest finished his mailout by saying he was thrilled with the re-election of the Ontario Progressive Conservatives, saying Premier Doug Ford offered Conservatives a “road map to win in Ontario”

“I agree with Doug Ford’s welcoming approach, not Pierre Polievre’s politics of division and anger.”