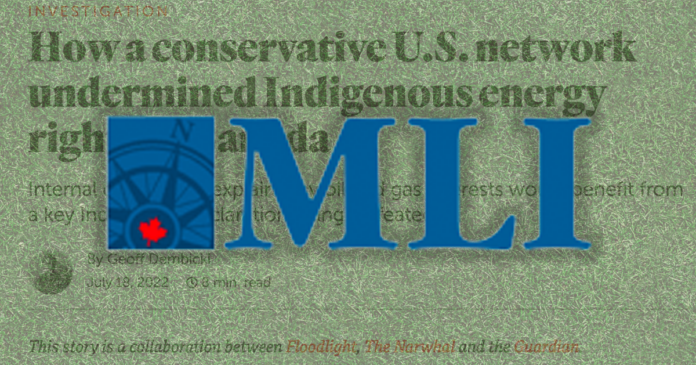 The Macdonald-Laurier Institute (MLI) is calling out the editors of the Guardian and the Narwhal for publishing an article the policy think tank says is “poorly researched and dishonest.”

Both publications ran a piece by author and climate reporter Geoff Dembicki titled “How a conservative US network undermined Indigenous energy rights in Canada.”

In his article, Dembicki writes that “a U.S.-based libertarian coalition has spent years pressuring the Canadian government to limit how much Indigenous communities can push back on energy development on their own land.”

“Atlas and the Macdonald-Laurier Institute have for years been pushing back against attempts by the Liberal government of Prime Minister Justin Trudeau to align Canadian laws with the United Nations Declaration on the Rights of Indigenous Peoples (UNDRIP),” wrote the author.

In response to Dembicki’s piece, MLI said that “it is regrettable that such a poorly researched and dishonest article was published by the Guardian and Narwhal.”

The policy think tank said “the central thesis of the article, namely that the interests of the Atlas Network funders shaped our work on the Aboriginal Canada and the Natural Resource Economy project, is easily rebutted by the simple fact that MLI has never solicited Atlas Network funding for this project.”

The institute also stated it does not take directions from donors or funders that relate to the nature, scope, or policies it advocates for. MLI says it made this clear to Dembicki when he reached out for comment before publishing his article.

The organization added that given that the funding it receives from Atlas Network makes up “a fraction of 1 percent” of their revenue, it is hence “unclear upon what basis the author draws” the inference that Atlas directs MLI’s work.

MLI also accused Dembicki of neglecting basic information and alleged he suppressed information they provided that went contrary to his narrative.

The think tank said it told Dembicki that “a core, guiding principle of MLI’s work is that Indigenous peoples should be empowered to chart their own courses, whether that be as proponents, partners, owners, or indeed as opponents of projects on territories over which they are rights holders.”

MLI also said the suggestion that it opposes UNDRIP outright is false.

“Our authors, much like dozens of First Nations communities throughout Canada, expressed concerns with the implementing legislation in Canada for UNDRIP, not with UNDRIP itself,” the institute wrote.

“Many versions of the implementing legislation were flawed, vague, and non-committal, and additionally, the legislation itself failed to meet the standard of free, prior, and informed consent.”

In a separate publication, MLI’s Melissa Mbarki and Chris Sankey, who are both Indigenous, accused the Guardian and Narwhal of siding with “the racists, paternalists and colonialists who have decided that they, and they alone, know what is right for Indigenous peoples,” when they chose to publish Dembicki’s article.

“We are now facing a new and disruptive strand of colonialism: eco-colonialism,” they wrote. “This is perpetrated by climate radicals who believe that their ideology justifies denying Indigenous communities the right to speak for themselves and denying them access to opportunities that the colonizers have enjoyed for centuries.”

Mbarki and Sankey said “eco-colonialists” don’t believe Indigenous communities should have the possibility of determining their own futures or control their land in a beneficial way. “Self-appointed outsiders like Mr. Dembicki are, wittingly or unwittingly, condemning our communities to poverty.”

True North reached out to Dembicki, the Guardian and Narwhal for comment, but they did not respond in time for publication.