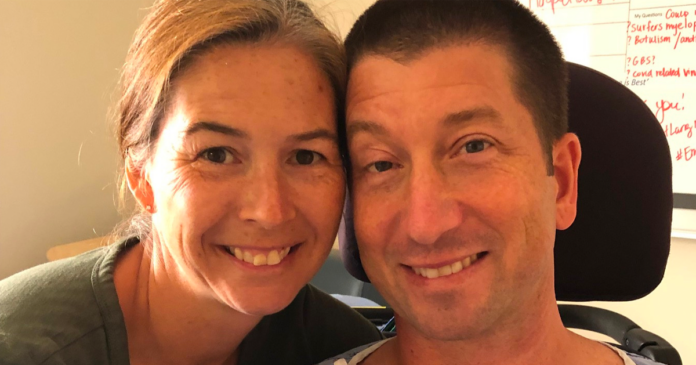 Julian Scholefield experienced paralysis from the waist down just 12 days after receiving his second dose of the Pfizer-BioNTech vaccine.

According to Castanet, it’s been over a year since Scholefield was paralyzed and he has yet to receive any support from the government’s Vaccine Injury Support Program (VISP).

On July 25 2021, the Summerland resident was out on Okanagan Lake with his family when he noticed that his left leg started to get tingly.

“Then it started to go up on my right leg as well. And that gave me a little bit more worry. So we decided to head back to shore and we were back at the dock within two hours. And at that point, I was actually paralyzed from about my midsection down, and I couldn’t hold myself up.”

Scholefield was rushed to Kelowna General, where he spent three weeks before being moved to Penticton Regional for five weeks. He was then moved to G Strong in Vancouver to go through rehabilitation for an additional five weeks.

Since then, Scholefield has had to have his house outfitted to accommodate his wheelchair, at a cost to his family.

“We’ve got a three-floor lift and that was a significant cost, obviously out of pocket. That cost may or may not be covered by the vaccine injury support program. We don’t know. And so at this stage, it’s a debt that’s sort of lingering, sitting there.”

Scholefield has been unable to work as a result of the injury and is on disability. A GoFundMe started by his wife Angela helped raise money for basic needs such as the wheelchair, physical therapy and an elevator for his home.

Scholefield was diagnosed with acute disseminated encephalomyelitis (ADEM), where inflammation in the brain and spinal cord damages protective nerve fibres, according to the National Institutes of Health.

Through a process of elimination, doctors have found that the condition was caused by his reaction to the vaccine. “They were able to just eliminate every other possible cause. And there’s this outlier, where I had the vaccine,” said Scholefield.

The B.C. Centre for Disease Control (BCCDC) stated on their website that the conditions can occur up to six weeks following vaccination. Side effects can happen from vaccines and “vaccine safety is continuously monitored to identify any serious adverse events.”

“To date, no cases of ADEM have been reported in association with the COVID-19 vaccines in BC,” said the BCCDC when Castanet reached out for comment. “All adverse events following immunization reported to BC public health are investigated and are further reported to the national surveillance system,” they added.

“ADEM is a very rare condition considered to be autoimmune in nature, of which about 40 cases are reported each year in BC (due to non-vaccine causes), with a distribution across the age span.”

In addition to alternative medicine therapies, Scholefield has been undergoing chemotherapy treatment to bring down swelling in his spine.

“It’s a year later, and I’m still finding out how to make things work, how to do things in day-to-day life. Getting up in the morning is probably the worst,” he said. “It’s the hardest. I wake up every day and I’m like, ‘Yep, still can’t feel my legs’, and look over and there’s the wheelchair and then it’s like, okay, yeah, this is still real, this is still true.”

“This was a government-mandated vaccine, I followed the rules, I did what I was told. And so far, I feel like the government does not have my back.”

Scholefield is still waiting for government compensation after applying to the VISP in October 2021. According to statistics provided by the government website, 774 claims have been received between June 1 2021 and June 1 2022.

“My file is still under review. And what that means is kind of on a bi-weekly basis, I check in and say ‘Hey, where’s my file at?’ And they say, ‘Still waiting.’ And I’ve called in, emailed in, followed up, and it’s still under review and to me, that’s just taking too long.”

So far, eight claims have been approved by the Medical Review Board.

In May, Ross Wightman from Lake Country had his vaccine injury certified and was eligible for compensation, being one of the first in Canada.

Scholefield said he reached out to local officials including the province’s top doctor Dr. Bonnie Henry letting them know what had occurred. No one responded.