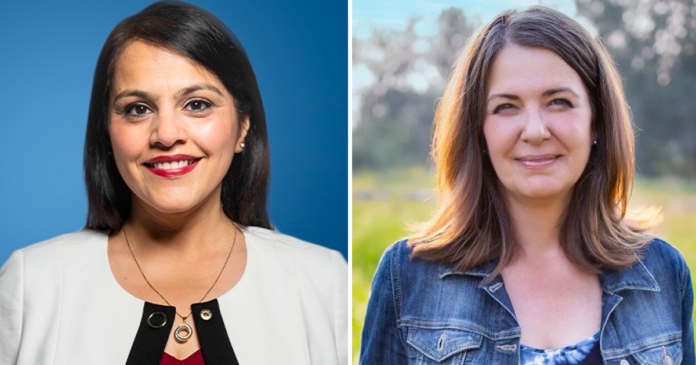 After relentlessly attacking Smith during the first leadership debate on Wednesday, Sawhney told reporters that a Danielle Smith government would be “disunifying” for the party’s caucus.

While the former Transportation minister registered 0% support with UCP supporters in a Leger poll released Sunday — and Smith leading with 22% support — Sawhney is not holding back her criticism of the former Wildrose leader.

The polls and the media are saying it’s becoming a race against Smith, but she speculates the UCP caucus would split if Smith becomes leader, Sawhney told reporters.

“That’s why it was important for all candidates to speak up today about some of the policy ideas that (Smith) has brought forward that are incredibly damaging,” she said Wednesday evening.

Smith is winning broad support with promises never to lockdown Alberta again, to rehaul Alberta Health Services (AHS), and to introduce the Alberta Sovereignty Act which would bar federal legislation considered harmful to the province.

During the Wednesday debate, the Calgary-North East MLA constantly attacked the perceived frontrunner  — sometimes on a personal level.

Sawhney launched her first shot in her opening remarks, saying the UCP needs more than “a talk show host” to unify and win a general election. Seconds earlier, Smith had touted her history as a talk show journalist.

Smith’s Alberta Sovereignty Act is creating chaos, it’s “seductive” and there’s nothing about it that makes sense, Sawhney said. Candidates “must not be risky and hot-headed” or respond to Ottawa in anger, she continued to jibe Smith, who was standing to her right.

She later said the business community is concerned with Smith’s rhetoric.

While discussing healthcare, Sawhney said there are issues with AHS and it might be time to move back to regional boards. She’s promised a public inquiry into the Covid-19 pandemic response, if elected.

She then took aim at Smith’s controversial comments on cancer, preventative treatments and early detection, saying the frontrunner’s remarks “diminished” the experience of cancer.

In a podcast last week discussing naturopathic care, Smith said preventative treatments and early detection could lead to better outcomes for cancer patients, who have no alternatives to chemotherapy, radiation and surgery in the late stages of cancer.

When Smith clarified her remarks during the debate, Sawhney said she “didn’t buy it.”

Sawhney later told reporters she went “a little bit personal in the debate” because of Smith’s comments about cancer. As a former community and social services minister, Sawhney said she’s dealt with a lot of vulnerable individuals who’ve suffered from cancer and mental health issues thereafter.

“I’ve made a mistake and you apologize, you move forward, but the doubling down was not appreciated,” she told reporters following the debate. “And that’s why I felt like I needed to definitely say more than what I normally would.”

In a scrum following the debate, Smith apologized to “anyone who was hurt by her comments,” but encouraged supporters to listen to her full podcast to understand the context of her remarks.

Sawnhey also said constituents have told her they’ve received calls from pollsters canvassing support for UCP leadership candidates, but the survey did not include herself or contender Leela Aheer on the poll. Aheer registered no support in the Leger poll, the only candidate to place lower than Sawhney.

“But having said that, I’m really focused on selling memberships,” Sawnhey said.

The leadership candidate also said she’s paid the full $175,000 to get on the ballot.