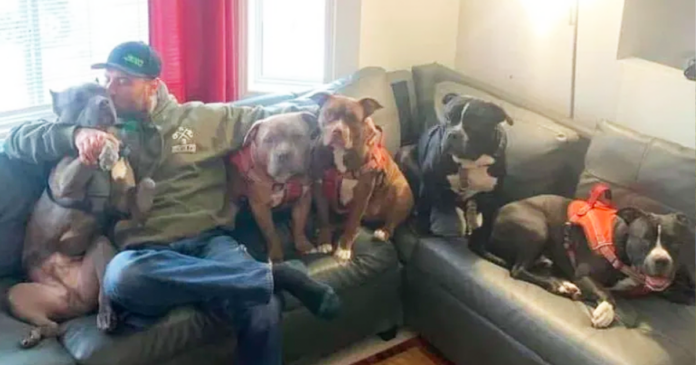 Social and political contagions of all kinds pique my curiosity. Believers have in common the tendency first to elevate emotion over critical thinking, thence to denial of objective, scientifically established truth and embrace of conspiracy theories, and finally to cultish zombieism in its service, even when the serious harms attached to their belief system are apparent to everyone else.

For the last several years, the cult that has formed around gender ideology has been a staple of my commentary. But I was very well prepared for the gender version of this syndrome, because I spent many years exploring a similar pathology on a very different subject.

My first professional journey down the rabbit hole of the cult mindset began in the early 2000’s when, having written an evidence-based column on the public-health dangers presented by an uptick in the canine population of pit bull type dogs, I experienced email blowback (this was before social media) so fierce and hateful – but also so uniform in its pit bull-affirming mantras – that I knew I was on to a social phenomenon that went way beyond typical breed devotion.

Combatting the pit bull advocacy machine, well-funded and well-organized, became a challenge I accepted for many years. Ultimately, after countless columns and longer articles that I knew only a small percentage of my readers found interesting, although a sizable number of those who did were passionately grateful for them (typically those whose pets had been savaged to death by pit bulls, or worse, those whose children or other family members had been mauled in random attacks, almost invariably the case with pit bulls), I conceded defeat. The pit bull population grows apace. So does the damage they wreak. And all my evidence-based writing fell into a (public policy) black hole.

So I rarely write about pit bulls these days. But like an old war horse, when the trumpet sounds – in this case, two pit bull-related fatalities in Canada – I feel bound to respond.

Noelville is a tiny town in northern Ontario, population about 250. According to a brief police report, on July 14, a man was attacked by his own “pit bull type dog,” which caused injuries grave enough that the owner had to be airlifted to hospital. To compound the tragedy, the owner’s elderly neighbour, 83-year old Chuck Evans, witnessing the attack, rushed to the victim’s aid, but “suffered a medical emergency” and died.

The medical emergency alluded to in the police report may have been a heart attack. Or the man may have been killed by the pit bull. A daughter in Cobourg, Cathy Foskett, posted on Facebook that “Tragically today my Dad was attacked and killed by a pitbull.” A son’s Facebook post  concurs,, adding  – directed at the wounded owner – “plz tell me why you had a vicious f****** dog…miss you forever dad…beyond words…rip Chuck Evans.”

Pit bull-related deaths are very common in the U.S. – more than 20 a year – but rare in Canada.

So two pit bull-related deaths within two months – in addition to Evans, on June 5, an 86-year old woman in Calgary, Betty Ann “Rusty” Williams, was mauled to death by a neighbour’s three pit bull type dogs – is newsworthy.

Previous to Williams, Lisa Lloyd of Langdon Alberta, a suburb of Calgary, was killed while defending her toddler granddaughter from attack by her own pit bull/boxer mix in September 2018. Apart from the fact that it took an unconscionable 30 minutes for the City to respond to the 911 call, Williams’ death is an awkward reminder to Calgary Animal Services and all the other good-intentioned advocates in the “no-kill” movement that the vaunted “Calgary model” of animal control. while pleasing to anti-science dog sentimentalists, puts the rescue of high-risk dogs above the safety of citizens.

The Calgary model assumes that risk for attacks by dogs is a function of owner behaviour rather than canine genetics exacerbated by human behaviour. This “bad owner” school of thought presumes that “good” owners can, through responsible guardianship and obedience conditioning, train dogs to repress their natural instincts. As Bill Bruce, Calgary’s director of animal and bylaw services from 2000-2012 said of his 2006 Responsible Pet Ownership Bylaw, “Our philosophy is that aggression is a human problem with respect to managing their dog more than it is a canine issue, and if we address the human side, the canine problem will take care of itself.”

The mantra of these believers is “Punish the deed, not the breed.” In other words, punish breed dogs as though they were all individuals, like humans, who mate randomly, rather than what they actually are: predictable stereotypes of the assembly-line breeding from which they have inherited their morphology and principal traits.

As is invariably the case in all pit bull-related fatalities, pit bull cult members and their allies – often mocked in pit bull critical circles as “useful pitiots” – spring into action, warning against a “knee-jerk” reaction that would stigmatize pit bulls and encourage any talk of breed bans.

“Any dog of any breed, any age, any mix can have behavioural issues,” said local veterinarian Dr. Miranda Logan in response to the Calgary grandmother’s death. Indeed they can. But the sudden, unprovoked killing of family members is not generally a “behavioural” issue with 99% of the other 399 dog breeds. In spite of her professional credentials, this vet is playing handmaiden to the pit bull cult in the same way professional therapists and biologists are playing handmaiden to the cult of gender ideology.

(Interesting sidebar: Pit bull love may be fairly described as a fetish amongst Queer-theory academics. Search “pit bulls, queer theory”: I just did, and got 1,830,000 hits. Read some of their papers, as I have. They’re a hoot. While you’re at it, search “Critical Race Theory, pit bulls”. I just did and got 6,520,000 hits. Woke theorists see the pit bull as a stand-in for oppressed people, and many otherwise intelligent intellectuals hold that discrimination against pit bulls for public-health reasons is literally a form of racism.)

Dr. Logan’s statement is firstly a repudiation of the science of genetics. More importantly, it implicitly rejects the science of epidemiology which, in the case of dog bite-related injury and death, should be the supremely relevant basis for public health policy.

Epidemiologically, the record is clear. Pit bulls are implicated in about 70% of dog-related human deaths, even though they represent only six percent of the dog breed population, and they account for more than 90% of dog-related animal deaths. Most of these fatal attacks are unprovoked, and a hellish number of them are attacks on children, often by their own pets. Their particular biting style – “rending” rather than slashing or bite-and-release – causes such horrific injuries that surgeons have had to devise special techniques for dealing with them. In 2016, pit bulls were responsible for over 90% of dog attacks that resulted in disfigurement.

Moreover, according to Animals24-7, which has been tracking dog-related deaths and injuries for 40 years, for every dog attack fatality, “there are approximately 10 permanently disfiguring maulings, around 100 injuries severe enough to bring insurance payouts,  according to insurance industry data, and according to U.S. Centers for Disease Control & Prevention data,  about 100,000 bites of lesser severity.” A five-year review of dog bite-related outcomes in a Pittsburgh pediatric hospital found that the culprit in any dog bite-related hospital stay of over six days was invariably a pit bull-type dog.

Before the Calgary Model became the default, pit bulls, dog attacks and dogfighting were unknown to Calgarians. Then, following Hurricane Katrina in 2005, as chronicled by Animals24-7 publishers Merritt and Beth Clifton, Calgary opened its doors to pit bull rescues and the pit bull population multiplied. Followed, inevitably, as everywhere else on the planet where pit bulls are welcome, by soaring “incidents.” By 2009, “dogfighting burst into the open in Calgary.” There were “a then-record 58 dog bites reported in Calgary in 2009, 102 in 2010, 127 in 2011 and 201 in 2012, 70% of the total reportedly by pit bulls, when Bruce retired in mid-year.” Pit bulls were responsible for an average of 40 attacks a year between 2009-2019.

The essence of public safety is harm reduction through a change in the environment in which the harm is occurring, so that even careless (i.e. human) behaviour is not punished by serious injury. When hospitals reported a certain number of injuries from children falling off playground equipment onto concrete, parents “panicked” and playground flooring was changed to prevent bad injuries when children fell. Nobody blamed the children for tempting fate, or argued for educating them on strategies to prevent falling, or suggested post-injury reprisals for the schools, which is the thinking behind the “owner responsibility” model many pit bull advocates recommend.

In the case of dog maulings and fatalities, so much worse than concrete playgrounds, a certain panic is not unjustified. The necessary change in the environment here is to phase out the breeding of pit bulls and enact legislation that targets these dogs for special constraints (muzzles) or outright bans. They work.

True cult believers are impervious to data and logic. And their propaganda mills have successfully marketed the pit bull as a victim with a “bad rap”. In the present cultural climate, where human victimhood offers elevated social status, the pit bull has benefited by association. When rescuers get mugged by genetic reality, they understand. But until they do, they keep drinking the Kool-Aid.

“Yeah, but this is a different breed…the power that comes behind bull dog, pit bull, presa canario, the fighting breed – they have an extra boost, they can go into a zone, they don’t feel the pain anymore.  He is using the bulldog in him, which is way too powerful… So if you are trying to create submission in a fighting breed, it’s not going to happen.   They would rather die than surrender… If you add pain, it only infuriates them…to them pain is that adrenaline rush, they are looking forward to that, they are addicted to it…That’s why they are such great fighters….Especially with fighting breeds, you’re going to have these explosions over and over because there’s no limits in their brain.”

Who would want a dog who has brain “explosions” baked into his genetic blueprint, and the potential to exhibit them at any time without anyone ever knowing why? A lot of people.