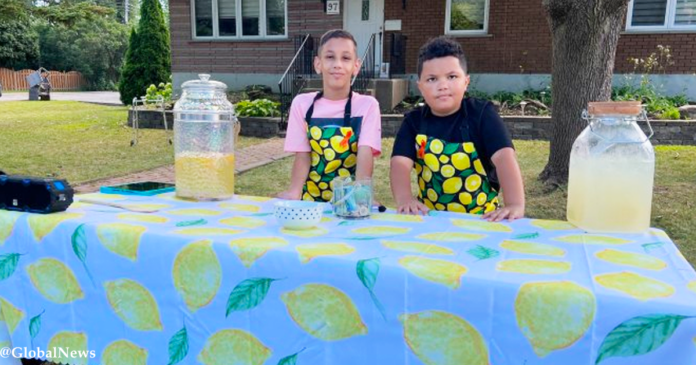 A Montreal mother claims police told her to take down a charity lemonade stand her kids had set up and threatened her with arrest.

Massa was diagnosed with Multiple Sclerosis (MS) in 2020, and uses a walker and wheelchair to get around.

“If we give a bunch of money to the charity, we can find the cure for multiple sclerosis,” one of the sons told Global News.

However, Massa says an issue arose when her kids used a megaphone to attract people to their lemonade stand. An angry man reportedly approached the boys and rudely told them off.

“He said, ‘you little mother-effers. I’m going to shut you down,’” claims Massa.

Massa says she responded by telling the man to “get the hell off my property” to which he said “I’m calling the police.”

Police showed up at Massa’s Montreal property and told her the lemonade stand had to be taken down.

Massa says she told the officer, “give me a fine. I’ll pay the fine.”

According to Massa, the officer did not take her statement well and responded by making a comment about her wheelchair.

“Oh, I’m not giving you a fine. You think that because you’re in a wheelchair, you’re above the law,” the officer allegedly said.

Massa says that the officer then threatened to arrest her, leading her to record the ordeal.

She says the police ended up leaving three hours later but warned she would be arrested if her kids used the megaphone again.

“It ended with this sergeant telling me my kids are not allowed to have their megaphone and that they don’t want to have to come back here and arrest me,” said Massa.

Massa also said she found the situation traumatizing and is demanding an apology from police.

“To have such a beautiful story turn into such a nightmare disaster like it did yesterday, I was shaking.”

In response to the incident, Montreal Police told the Global News that officers came to the scene due to a noise complaint, not the lemonade stand, stating that four 911 calls about excessive noise had been received.

“That is the only reason officers from Station 3 presented themselves to the location multiple times,” wrote Montreal Police in an email, adding that “Station 3 had no intention of closing the kiosk.”

Police also claimed Massa wanted her children to continue using the megaphone, which led to her being told that continuing such behaviour would result in a fine or possibly an arrest.

“Nobody wanted to get to the point,” added Montreal Police.

“They simply asked multiple times to stop using the megaphone, for the peace and respect of the neighbourhood and good relations between residents of the area. They explained the powers, responsibilities, and procedures of the SPVM (Service de police de la Ville de Montréal) to stop this type of infraction.”

Police did not apologize in their statement, but invited Massa to file a complaint.

Massa and her boys have received support from neighbours following the incident, and the boys say they’ve raised over $2000 for the MS Society.