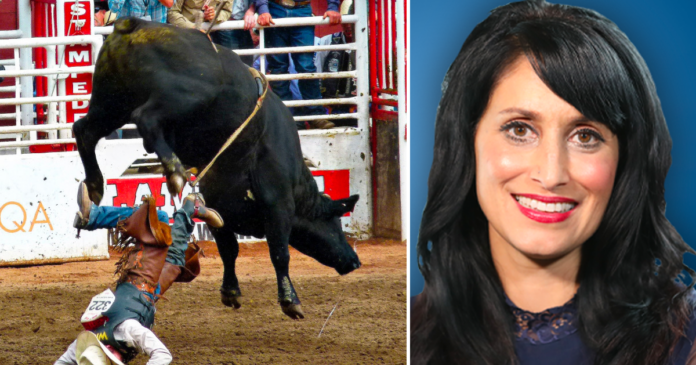 United Conservative Party (UCP) leadership candidate Leela Aheer jumped in front of a bull and pushed it off a boy it was trampling.

The heroic action occurred this weekend in Aheer’s riding at the Strathmore Stampede during the Running of the Bulls event.

In a video circulating on Twitter, a boy in lime green shorts is seen standing on the tracks, when suddenly, a bull turns around, runs at the boy and tramples him to the ground. Aheer can be seen jumping off a fence and pushing the bull off the boy, while the bull kicks at the boy beneath him.

“I just jumped in, I didn’t think,” Aheer told True North. “I thought he was gonna die.”

Running of the Bulls has been an event since 2005, Aheer said. Those participating must sign a complete waiver and follow a “humongous set of rules…one of them being not to touch the animals, I might add,” she said.

The leadership candidate said there’s three sets of bulls that pass onlookers, referred to as the young guys, the angry teenagers and the senior bulls.

Organizers told event attendees to stay on the fence during the event, Aheer said.

The Chestermere-Rocky View MLA can be seen straddling the fence in the video, along with other event attendees who are all wearing red shirts.

A black bull from the senior group passes her, before turning around and charging at the boy and trampling him to the ground. Aheer jumps off the fence and rushes to the boy’s aid within seconds.

A man in a cowboy hat joins her seconds later and together, the two push the bull off the boy. Aheer grabs the boy and helps him over the fence.

Aheer said she can still feel the bull’s hair in her hands. She was in so much shock following the incident, she didn’t remember what happened until she saw the video, she said.

“I don’t remember anything after that other than scooping that kid up, because I can lift him up and get him onto the fence.”

After watching the video, Aheer said she almost fell off her chair.

“I had no idea that that’s what had happened,” she said. “I actually have a hard time watching the video simply because I didn’t realize how seriously he had been bowled over… I just thought he was gonna die.”

The boy was a “farm kid” and he was “tucking and rolling” under the bull, she said. She said the boy was scraped up, but turned up later that night to “party with his friends.”

Aheer also said she didn’t know why the boy was standing in the tracks when organizers told event attendees to stay on the fence. True North was unable to contact the boy in the video.