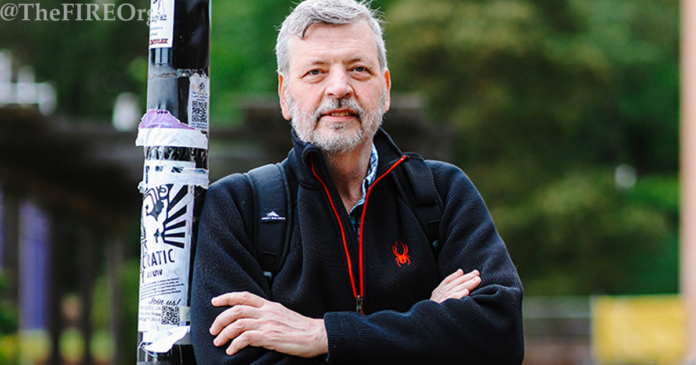 University of Washington computer sciences professor Stuart Reges is speaking out about the use of Indigenous land acknowledgements, which he calls “meaningless.”

This comes as many institutions in both Canada and the United States are increasingly reminding people they are on “unceded” traditional native land.

According to Native Land Digital, “all settlers, including recent arrivants, have a responsibility to consider what it means to acknowledge the history and legacy of colonialism.”

“They are meaningless if they aren’t paired with some kind of concrete action. And I think the only people who are made to feel better by them are the people who say them.”

He added that it gets those people “off the hook from having to do anything because they feel like they’ve done what they’re supposed to do by saying it.”

Reges, who opposes the “diversity equity and inclusion agenda,” said he believes woke activists on campuses made a miscalculation when they opted to promote land acknowledgements.

“You may not like the political statement they make,” said Reges, adding “that’s certainly what happened in my case.”

As previously reported by Bari Weiss’ Common Sense on Substack, Reges got in hot water with the University of Washington over a paragraph he inserted about land acknowledgements in a course syllabus – after the university recommended professors include an acknowledgement.

“I acknowledge that by the labour theory of property the Coast Salish people can claim historical ownership of almost none of the land currently occupied by the University of Washington,” wrote Reges in his syllabus.

Lawyers say the statement resulted in the university creating a censored version of Reges’ syllabus – which he was unable to modify. They also created a competing class that students could switch to, and launched an investigation into him.

Reges has since filed a lawsuit against the university, and says that he is confident in his case due to the First Amendment of the American Constitution – a protection Reges says Canada does not have.

“I don’t know that my case could be made in Canada. You know, but it’s a very clear case, I think in the United States,” said Reges.

While the Canadian Charter of Rights and Freedoms guarantees freedom of expression, that right is subject to “reasonable limits.” The “wilful promotion of hatred” is also an offense under the Canadian Criminal Code.

True North reached out to the University of Washington for comment on Reges’ case.

Spokesperson Victor Balta said that “the University of Washington is aware of the complaint. The university continues to assert that it hasn’t violated Stuart Reges’ First Amendment rights and we look forward to presenting our position if called to do so.”

Land acknowledgements are becoming prominent in Canada, including at schools and universities, amid a push for Indigenous reconciliation.

However, their use has been the subject of debate.

Meanwhile, NDP politicians have pushed for land acknowledgements to be read in the House of Commons.

“I know New Democrats have often felt, if we’re going to talk about changing the opening ceremony for Parliament, that we ought to have a land acknowledgement as part of that opening ceremony,” NDP MP Daniel Blaikie told reporters in May.

Land acknowledgements have also made their way into some church services – including at congregations who are part of the progressive United Church of Canada.

“Acknowledging the territory where we gather and the people who have traditionally called it home for thousands of years is a way to continue to live out the church’s Apologies to the First Peoples of North America,” reads a document posted to the United Church’s website.

According to the Foundation for Individual Rights and Expression, over 700 scholars have been targeted for their words or scholarship since 2015.

Many students have also been the subject of censorship on college and university campuses, amid growing wokeness on many issues including Indigenous reconciliation.