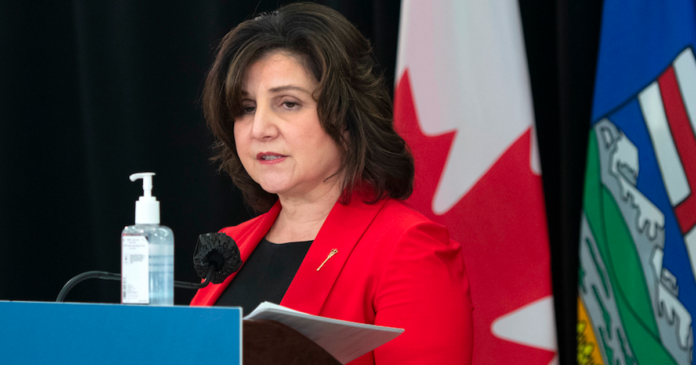 Education Minister Adriana LaGrange is in the fight of her life to keep her United Conservative Party (UCP) nomination in Red Deer – North.

She’s being challenged by popular freedom fighter Andrew Clews, co-founder of Hold The Line, a group which supported Albertans impacted by Covid-19 restrictions and helped them resist vaccine coercion.

He was motivated to run because LaGrange has shown a complete lack of support for the freedom movement, Clews told True North.

“Even to date, I have not heard (LaGrange) voice any type of support for the rights and freedoms that we once had as Albertans,” he said.

“I’m not impressed with how our government has handled the pandemic, how they have so casually given rights and taken rights away from Albertans…we need to elect leaders to go to the Alberta legislature and stand for freedom.”

Clews, who’s a project manager in commercial construction, said his group supported families impacted by Alberta’s vaccine mandates. For example, if someone was at risk of losing their job over a Covid-19 vaccine mandate, the group would share religious exemption waivers that had past success.

In instances where employees lost their jobs, organizers would connect them with suitable employers. If those efforts were unsuccessful, the group would financially support a family during the transition period, Clews said.

“If we could support families — so keep families together and help keep kids safe — then you could live to fight another day,” he said.

Hold the Line has over 1,000 members in the central Alberta region, Clews said.

Per party bylaws, the cutoff to buy memberships to vote in the contest closed 21 days ahead of the August 18 nomination vote.

Voting will occur in-person at the Pines Community Centre from 11 a.m. to 8 p.m.

In a statement to True North, LaGrange said she respects anyone “who puts forward his or her name to run for this great party.”

“I am eager to connect with conservatives from all walks of life and every part of the riding,” she wrote.

The MLA was elected to represent Red Deer – North in April 2019. Premier Jason Kenney handed her the education portfolio later that month.

While in the role, she implemented a new K-6 curriculum to improve literacy and numeracy, which was criticized by the opposition and a teachers’ union for a lack of consultation. It will begin rolling out in schools this fall.

Clews said he’s not challenging LaGrange on her education curriculum, but he would like more school choices. Parents can send their kids to public schools or Catholic schools with taxpayer funding, but some would prefer homeschooling, private school or a learning pod, he said.

“We need to reform the funding for our school system so that the funding goes to the child and follows the child as opposed to going automatically into the public school or Catholic school system,” he said. “That would give parents the freedom to really send their child to a school that aligns with their values.”

The UCP board decides when to open nominations based on recommendations from local nomination committees. It’s been accused in the past of giving preferential treatment to the party’s preferred candidates.

Clews said he was nervous he might have a target on his back as a freedom fighter challenging a sitting minister.

“At the end of the day, I collected my signatures, submitted my application, went through the interview process and was accepted,” he said. “I trust it’s going to be a fair election.”

If Clews wins the UCP nomination, LaGrange will remain the UCP MLA for the riding until the next provincial election, which is scheduled for spring 2023. Clews would run as the UCP candidate in the election.