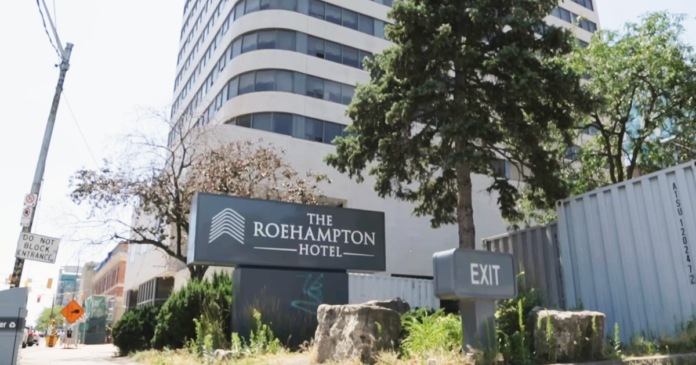 Scott Tulpin, a 31-year-old homeless man, has experienced it for himself.

He’s lived in two hotel shelters in the past year – the Delta Hotel at Kennedy and Hwy 401 and downtown at the Strathcona Hotel.

In a candid interview with True North, he says the shelters give residents all kinds of “free stuff” – including cellphones – but don’t actually provide any counselling support.

This is despite repeated assurances from Mayor John Tory and the city’s housing officials that shelter residents are getting such help.

Before the pandemic, there were “expectations” in shelters to get job training or hand out resumes but that has all changed, he says.

Tulpin, who works full-time in construction, has been in and out of the shelter system because he can’t afford a decent apartment that isn’t a drug den or full of welfare clients up all night partying.

He hasn’t met a single person at the Strathcona who is working and in all his time in the shelter system, he’s only encountered two people who are working.

“There’s no motivation to work when you can maintain your addiction and be provided housing and food and all these other things,” he said.

Tulpin says the accountability aspect has been “gravely neglected” in the shelter system.

“There’s no responsibility, no accountability, it’s just free rein in these places,” he said.

It’s not just the quality of care, or lack thereof, in the shelter system.

There is also no fiscal accountability, it seems.

A June report from the city’s auditor general showed that negligent city officials paid out at least $15 million extra for charges not covered by the hotel leases, vacant rooms and several other “facility surcharges” the hoteliers were not permitted to tack onto meals.

Tulpin, who’s been drug-free and sober for two years, says at the Delta hotel people of all ages are housed together – young girls with older men – and drug dealing is rampant. Even dealers live there, he said.

The Strathcona is somewhat better, he said. Still, there’s no curfew and residents can actually stay out all night.

“There is a drug problem in every shelter in the city… the hotels are worse and a little more dangerous because they (the homeless) can just hide in their rooms all day,” Tulpin said.

Mental health is even used as an excuse to sanction bad behaviour.

He feels those working in the system don’t want to challenge residents or kick them out because they could lose their jobs.

“All they’re doing is managing decline,” Tulpin said. “They (shelter officials) will do anything to keep their bed numbers up.”

He adds that if people knew what was happening inside the shelter system, they’d be “shocked.”