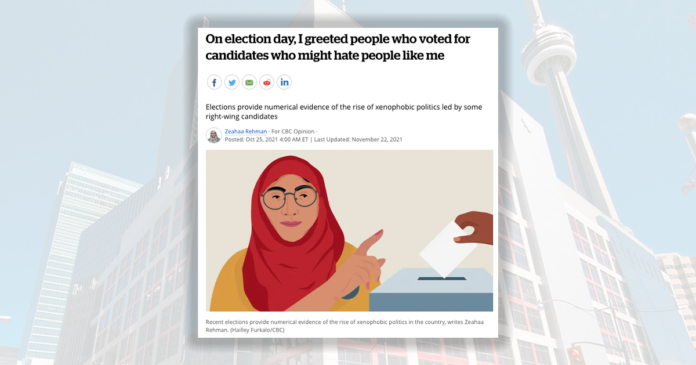 CBC’s Ombudsman Jack Nagler criticized the state broadcaster for publishing a commentary by an Elections Canada worker which painted elderly white voters and Conservative voters as hateful and racist.

According to Blacklock’s Reporter, Nagler ordered the CBC to review its editorial practices as a result of the incident.

“It was not okay to publish a headline that declared political parties and by inference their voters as ‘hating’ people,” said Nagler.

Nagler found that the commentary was in breach of the CBC’s Journalistic Standards And Practices by being “neither fair nor precise enough to be considered accurate.”

“Declaring a politician to be hateful should be based on their policies and their actions not just the colour of their lawn signs,” Nagler argued.

The decision was regarding an op-ed published in the fall written by Zeeha Rehman, an Elections Canada worker for the 2021 federal election. In the opinion piece Rehman argued that Conservative voters “hate people like me.”

“On Election Day I greeted people who voted for parties that hate people like me. Elections provide numerical evidence of the rise of right-wing politics and that should worry us all,” wrote Rehman.

“During the first hour of my shift an elderly white woman came in with a walker. After she left I couldn’t help but wonder whether, despite our pleasant interaction, she was one of the people who hate people like me.”

“It was jarring to realize that many of the people who had seemingly been nice to me throughout the day had chosen to vote for the Conservative Party,” she continued.

The network received a flood of complaints after the story was published.

“This piece was not up to our usual standards,” said CBC managing director Andree Lau in response to the complaints. “We took corrective action right away.”

The piece was eventually republished in November with alterations.

In a different decision in March regarding a viewer’s complaint that a CBC radio program discriminated against people of British descent, CBC director Treena Wood claimed that racism against white people “doesn’t exist.”