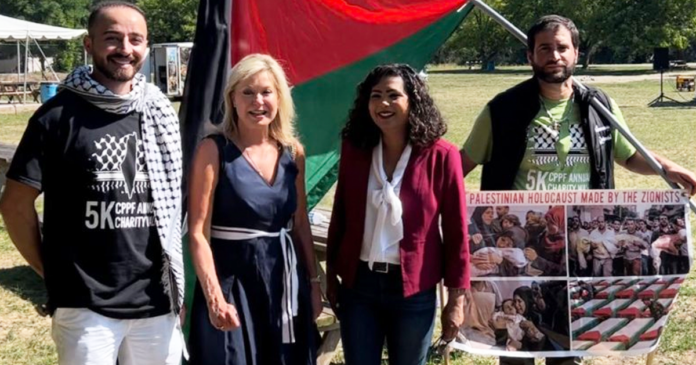 The human rights group Friends of Simon Wiesenthal Center (FSWC) called out Liberal MP Iqra Khalid for posing in a photograph with boycott, divestment and sanctions (BDS) protestors and a banner falsely accusing Israel of genocide.

FSWC said it was “shocked and disturbed” to see Khalid along with Mississauga Mayor Bonnie Crombie supporting the message at the event hosted by the Canadian Palestinian Professional Foundation at Our Lady Queen Croatia Park.

One of the Palestinian activists in the photo can be seen carrying a banner that reads “Palestinian holocaust made by the zionists.”

“Thank you Mississauga mayor Bonnie Crombie for supporting the Palestinian Canadian community and to condemn the most recent Israeli attacks on Gaza. Also thank you MP Iqra Khalid for your support & committing to always stand for Palestinian human rights & justice,” the accompanying tweet read.

Khalid has accused the Israeli government in the past of a “blatant disregard for human life” and alleged “forced evictions” of Palestinian people.

True North reached out to Khalid for comment but did not receive a response by the given deadline.

In a statement on the matter Mayor Crombie wrote that the photograph was taken without her knowledge and she did not agree with the messaging.

“The statement issued by the Canadian Defenders for Human Rights on social media does not accurately reflect my views,” wrote Crombie.

“The photo taken of me was done without my knowledge or consent and I certainly take exception to the sign displayed in the background and its message. Any comparison to the Holocaust diminishes the memory of the victims of that tragedy in human history.”

The BDS movement has been cited for being anti-Semitic. In 2020, former Secretary of State Mike Pompeo announced that the US government was cracking down on any organization involved in the campaign.

“We will immediately take steps to identify organizations that engage in hateful BDS conduct and withdraw US government support for such groups,” said Pompeo at the time.

“We want to stand with all other nations that recognize the BDS movement for the cancer that it is.”

During the Freedom Convoy protests, the Liberal government claimed that the presence of a few extremist flags was evidence that the peaceful protestors were radical despite the fact that organizers denounced their presence.