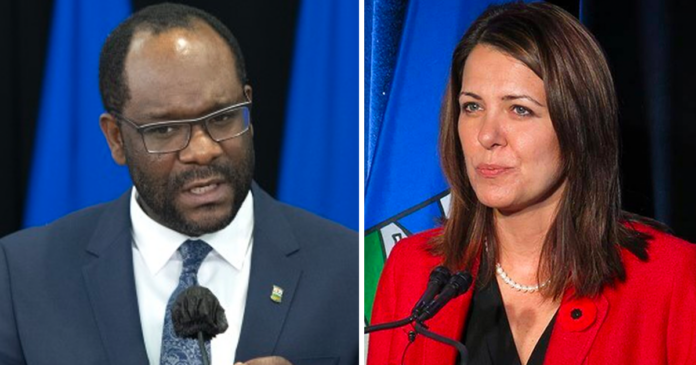 Alberta Labour and Immigration Minister Kaycee Madu is the second cabinet member and seventh United Conservative Party (UCP) MLA to endorse Danielle Smith as the best person to take over as Alberta’s premier.

Madu made his endorsement in his riding of Edmonton-South West at a Smith campaign event on Thursday night. Earlier in the day, Innisfail-Sylvan Lake MLA Devin Dreeshen also threw his support behind Smith.

The minister said his endorsement of Smith is one of the most consequential political decisions of life.

The party needs a leader who can beat the NDP and win seats in Edmonton, and that leader is Smith, who “has shown a true commitment to the grassroots of our party,” Madu told a crowd of just under 400 on Thursday.

Dreeshan said Smith is bringing hopeful ideas and policies that resonate with Albertans.

“I joined Danielle’s team to lend my political skills to a Danielle Smith UCP government,” he said. “I know that Danielle Smith is the leader that Alberta needs right now.”

A Mainstreet Research poll funded by the political advocacy group Take Back Alberta projects Smith winning on the fourth ballot, with 57.86% of support. Toews placed second with 42.14% of support, in the poll.

An internal UCP poll from the Smith campaign also found that Smith will win on the fourth ballot, as reported by the Calgary Sun.

Two of the MLAs who have endorsed Smith switched from earlier support of former finance minister Travis Toews, including Service Alberta Minister Nate Glubish, who took aim at the divisive politics of other campaigns.

Albertans who desire to vote in the leadership contest — which offers a unique opportunity to also vote for a premier — have until Friday at midnight to purchase a $10 membership.

Members must be a permanent resident of Alberta who is older than 14 years of age.

UCP members will elect the new leader and premier on October 6.