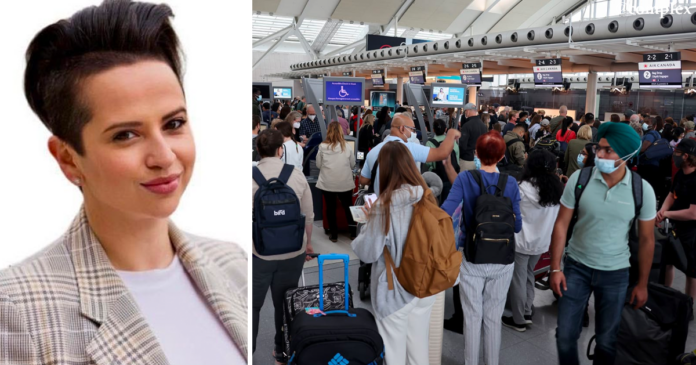 Conservative MP Melissa Lantsman is accusing the government of fudging numbers in order to mislead the public on just how many flights are being delayed and cancelled, as well as the long wait times travellers have to endure in security and customs.

In a lengthy thread on Twitter, the Thornhill MP pointed to a government graphic that makes the claim that 85% of flights left on time or within an hour of their scheduled departure. Lantsman noted that on Aug 17, 40% of Pearson Airport’s flights were delayed, and noted that the government’s messaging ignores the problems at Pearson.

“Yesterday 238 flights were delayed at Pearson. That’s 40%. Not 15%. Adding *within one hour* and taking the average across all Canadian airports paints a pretty inaccurate picture of the actual problem,” Lantsman tweeted.

Over the past few months, Canadian airports have suffered some of the worst delay and cancellation rates in the world, routinely placing above some of Europe’s and America’s worst airports.

Lantsman also ridiculed the government for ignoring that the problem is mostly concentrated at Toronto’s Pearson airport and Montreal-Pierre Trudeau airport, and presenting data aggregated across all Canadian airports can obfuscate the problem at these airports.

In response to the government claiming that 88% of travellers got through security in 15 minutes or less, Lantsman claims the government is purposely fudging the numbers.

“Look at peak times in the hub airports. Wait times actually increased between June and July according to public CATSA data. Aggregating the data across more airports ignores that delays are concentrated at YYZ and YUL where the solution is asking travellers to come 3hrs early.”

Lantsman capped her thread off by re-posting photos of the long lines in security and customs travellers took while waiting.

In June, the Trudeau government formed a cabinet committee to help alleviate the pressure being felt at Canadian airports. However, travellers are still enduring abnormally long wait times.

Trudeau’s transport minister Omar Alghabra is set to testify before the transportation committee regarding the airport crisis, a motion brought forward by MP Lantsman.

True North reached out to Transport Canada for comment. As of this article’s publication, they have yet to respond.