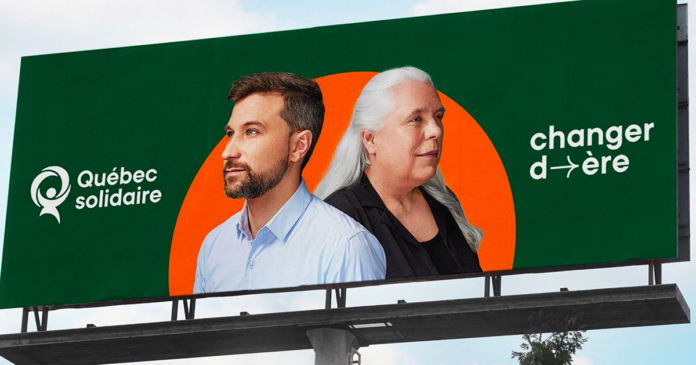 A graphic by the left-wing Quebec Solidaire (QS) party is being compared to communist propaganda by Quebecers on social media.

Party co-spokesperson Gabriel Nadeau-Dubois posted the graphic on Twitter on August 19 alongside the QS campaign slogan for the 2022 provincial election – “Changing eras.”

“Changing eras means that we will not solve the problems of Quebec today and tomorrow with solutions from the 90s,” he wrote.

The graphic features a green background with an orange circle centred behind the faces of the party’s two leaders, Gabriel Nadeau-Dubois and Manon Masse.

The QS party does not have a single leader, but rather employs co-leaders who are referred to as “co-spokespeoples.” One is male and the other is female. Nadeau-Dubois holds the party’s parliamentary leadership role.

“Let’s comment together on this excellent meme from the new QS ad… Have we finally found the real leader of Quebec Solidaire?” he tweeted.

Lisee also shared a video meme which features Nadeau-Dubois and Masse appearing alongside former soviet leader Vladimir Lenin, with the USSR anthem playing in the background.

Other Twitter users also pointed out that the QS graphic resembles Communist imagery.

True North reached out to both QS and Lisee for comment, but neither responded in time for publication.

Quebec Solidaire was founded in 2006 and ascribes to left-wing democratic socialist, feminist and environmentalist values – in addition to supporting Quebec sovereignty.

Masse previously told CBC News that her party was Marxist, saying “I think that the revolution that Québec Solidaire brings up, it’s a revolution (that) puts climate change and people at the centre of our target.”

However, Masse later said QS was neither Marxist nor communist.

The party said it would fund promises with higher taxes on corporations and wealthy Quebecers, as well as carbon taxes.

QS surged from 3 to 10 MNAs in Quebec’s national assembly in 2018, and polls currently say it is on track to win anywhere from 5 and 13 seats in the October 3 election.

On Tuesday, Premier Francois Legault announced that the Quebec election will begin on Aug. 28th. Voters head to the polls on Oct. 3.