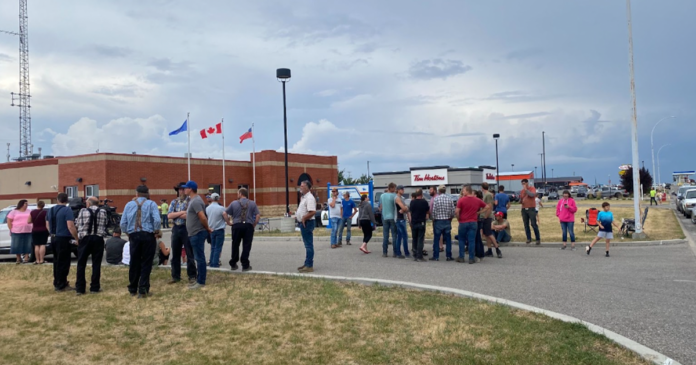 Around 30-40 protesters have gathered outside the RCMP detachment in Fort MacLeod to demand the release of freedom activist Alex Van Herk.

Van Herk was involved in the Coutts border blockade and in the GraceLife church protests.

According to Van Herk’s life-long friend Marco Van Huigenbos, Van Herk is refusing to sign a condition to end contact with Van Huigenbos who was also involved with the Coutts blockade.

Van Herk turned himself into the RCMP on Thursday afternoon.

The RCMP told True North an individual is in custody in Fort MacLeod, but said they can’t release specifics, including names, until charges are laid.

According to sources on the ground, the RCMP told Van Herk he was being detained because of charges from the GraceLife church. But, the RCMP has since added an additional charge of mischief over $5,000 stemming from Coutts.

“He’s not getting released today,” Van Huigenbos said. “At the earliest, bail will be tomorrow.”

The RCMP told Van Herk’s family he would be released within a matter of hours, but the delay appears to be caused by the condition to end contact with his friend which Van Herk has so far refused to sign, Van Huigenbos said.

Van Huigenbos said the condition is “unacceptable.” Van Huigenbos is an elected official — a Fort MacLeod town councillor — and has not been charged with anything.

“We see each other weekly, talk to each other daily,” Van Huigenbos told True North on Thursday evening.

After GraceLife Pastor James Coates was arrested for continuing to preach in breach of Covid-19 restrictions, Van Herk travelled to the church. A photo of him grabbing a police barricade — which was erected to keep churchgoers from entering their building — went viral. In the photo, Van Herk is seen grabbing one end of the barricade while police are grabbing the other.

A source on the ground said the RCMP Serious Crime Division is overseeing the case.

This is a breaking news story. More to follow.