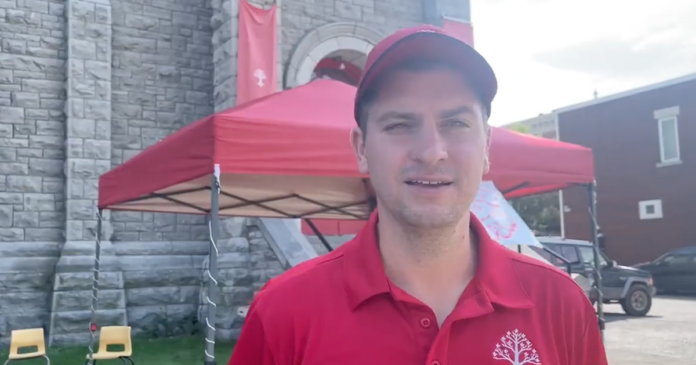 The United People of Canada (TUPOC) director William Komer says the group is not affiliated with the Freedom Convoy, calling the legacy media’s claim “completely untrue.”

TUPOC is making headlines amid a standoff with the landlord of Ottawa’s historic St Brigid’s church, which the group has been using as their “embassy.”

In several reports, the legacy media has claimed TUPOC is affiliated with the convoy because one of its directors, Kimberley Ward, said she was an adviser to Dwayne Lich, the husband of Tamara Lich.

The claims of convoy affiliation were amplified by Ottawa mayor Jim Watson, who told 580 CFRA the group is “clearly connected to the convoy people”

Speaking with True North Thursday, Komer said the group has no affiliation with the Freedom Convoy, calling the legacy media’s claim “completely untrue.”

However, some Ottawa residents continue to believe that the group is convoy affiliated, and have been protesting TUPOC’s presence.

Komer says the claims that his group is affiliated with the convoy have led to a “incitement of hate,” with opponents of the group committing illegal acts like trespassing, vandalism and assault.

The organization, which has been critical of the Ottawa Police Service (OPS), created its own security force to defend the church. They have also been using water guns to spray people, including photojournalists, who go onto their property.

TUPOC, a non-profit organization based out of London, Ontario, moved into St Brigid’s in July with plans to purchase the $5.95 million historic church. The organization also has plans to open similar spaces across the country.

Komer told the Capital Current that they want to revitalize the church and create a “membership-based community space” home to a café, a co-working area, gym and a recreational space with foosball and air hockey.

He also told CTV News in July that “the goal of St. Brigid’s is to in part to bring back to the community what was a great community space, previous to it being shut down.”

However, TUPOC’s plan to buy St Brigid’s from the current owners fell through, according to documents obtained by CTV News.

TUPOC’s lease was terminated by the owners on August 17 and the group was given five days to take their belongings and vacate the Ottawa church. The eviction order would be enforced Thursday, August 25 at 12:01 a.m.

The landlord says the organization has failed to give $100,000 in deposits, pay $10,000 in rent and has not proved they’ve acquired mandatory liability insurance worth $5 million. TUPOC is also being accused of not acquiring permits to do work on the property and violating the Ontario Heritage Act.

However, TUPOC said it has insurance and the landlord has denied two rent payments of $5,650 dated for July 15 and August 15.

Therefore, TUPOC is defying the landlord and has remained on the property past the deadline to vacate. TUPOC claims they are in an active lease and are being compliant.

The landlord has filed a court application against TUPOC, with the hearing scheduled for Friday, September 2 at 10:00 a.m.

Police say they will maintain an “enhanced presence” at St Brigid’s church until the dispute between TUPOC and the landlord is resolved.