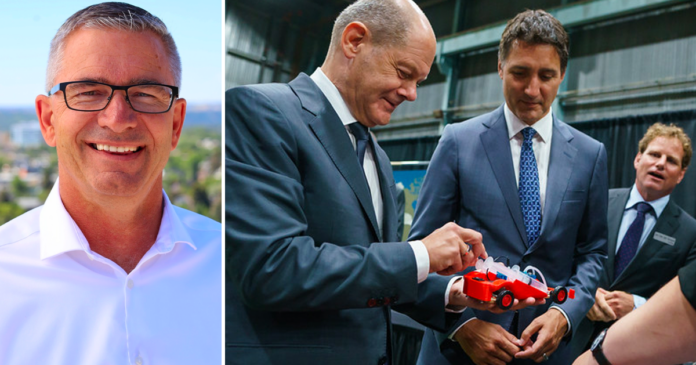 The Chancellor of Germany just made a rare visit to Canada looking for help breaking his country’s reliance on Russia for their basic energy needs – especially their supply of natural gas.

Given that Canada is the fifth largest producer of natural gas, and a close ally to all of Europe, it should be no surprise that he and his neighbours would look to us to export our valuable resource.  With only two other free nations in the top 15 proven reserves around the world, it should be a no-brainer that they would want our resources and that we would be eager to sell them.

Instead, Prime Minister Trudeau declared there “is no business case” for getting our natural gas to Europe.

Despite scores of analysts signalling a shortage of liquified natural gas (LNG) since Trudeau took office in 2015, he has made it clear his government does not support Canada getting the infrastructure in place to be the provider of choice to Europe and Asia.

The federal government’s obsession with emissions reductions at the expense of everything else over the last seven years has left Canada unable — and even unwilling — to come to the aid of our geopolitical allies as Russia invades Ukraine, and openly threatens the security of Europe more broadly.

When you consider that our LNG would displace coal plants in Europe, and the dozens under construction in Asia, we are also undermining the supposed purpose of these anti-development policies – lowering global emissions.

The Chancellor’s visit has laid bare Trudeau’s utter lack of leadership when it comes to Canada’s resources.

The U.S. recognized the huge demand for LNG in 2015 and went from exporting none to taking the top spot amongst exporters earlier this year. In that same period, 18 different LNG projects have been proposed in Canada, with only one actually underway – Coastal Gaslink, which  is constantly under siege by environmental activists.

With global demand expected to rise over the next 30 years, it is not too late for Canada to play its part in providing good jobs for Canadians, while providing the lowest-carbon natural gas in the world to Europe and Asia.

It will not happen, however, so long as the federal government is pursuing its so-called “Just Transition” aimed at phasing out the highly profitable production of oil and gas in Canada. All that does is force allies like Germany to send billions of dollars to strengthen dictatorships like Russia and in the Middle East.

Alberta can and must lead a strong shift in attitudes and policies in Canada in favour of responsible production of energy.  There’s not just an economic imperative to do this, but it is increasingly clear that it is a moral one.

We’ve already begun this work by bypassing Ottawa and directly engaging foreign governments, particularly in Washington. Influential Senator Joe Manchin responded by making a trip to Alberta to meet with our energy community and affirm Canada’s status as their supplier of choice.

I also strongly support fighting against egregious federal legislation like Bill C-69.  Our challenge to it is making its way to the Supreme Court with the support of every province.

Much more, however, clearly needs to be done if we are going to come anywhere close to Canada reaching its potential as an economic and geo-political power.

There’s some basic facts that many Canadians (and apparently our federal Cabinet Ministers) are clearly unaware of.  Canada’s energy sector is a world leader in reducing emissions per unit of production.  Our natural gas in particular would be the lowest-emission LNG in the world. Europe has classified natural gas as a green fuel because it is so effective at displacing coal.

In addition to the clear environmental benefits, our energy sector has made incredible gains by partnering with Indigenous communities.  Coastal Gaslink has agreements with every nation along the route ensuring Indigenous Canadians can be partners in prosperity.  Alberta’s Indigenous Opportunities Corporation is a giant step forward in facilitating these partnerships and should be replicated in other provinces.

By any reasonable environmental, social, and governance metric (ESG), Canada is clearly the major producer that global investors and customers should be looking to for LNG. The ‘transition’ Canada needs now is for our federal government to embrace that role and put urgency and common-sense back into our regulatory system.