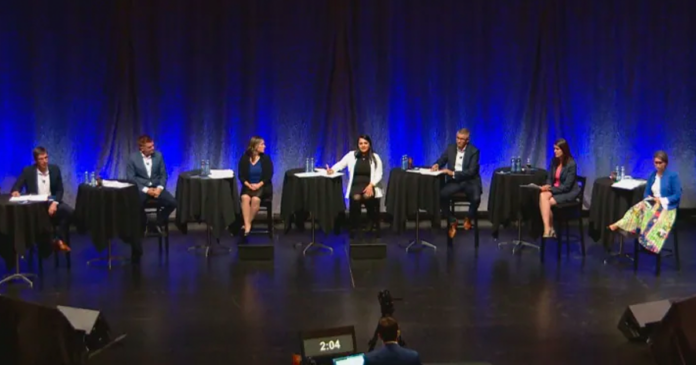 Perceived front runner Danielle Smith’s proposed Sovereignty Act, which would refuse to enforce federal legislation that interferes with provincial jurisdiction or that constitutes an attack on the interests of Alberta, was discussed at length during the debate.

Smith said she has a mandate to pass the Alberta Sovereignty Act as evidenced through the equalization referendum. Quebec and Saskatchewan have both already declared themselves a nation within a nation, she said.

Former Transportation Minister Rajan Sawney said she “completely” disagrees. Smith’s proposal does require a mandate from all Albertans in a general election and “equating the equalization referendum to a mandate for the sovereignty act is ludicrous,” she said.

“I would double-dog dare (Ottawa) to take us to court if we were starting to build pipelines with our First Nations partners, and bringing not only our product to market but also bringing good paying jobs and prosperity to those communities because I tell you, we would win.”

Responding to the federal government’s plan to reduce fertilizer, Brian Jean said “these stupid moves by Justin Trudeau are going to starve the world.”

“Alberta has the opportunity to provide so much more.”

Jean said he would develop a cross-commodity advisory board of farmers and ranchers to give information directly to the ministers and Premier.

Todd Loewen said more advisory boards aren’t needed — “we need to just get government out of the way of farmers and ranchers.” He also said the Trudeau Liberal’s policy is not an environmental policy, it’s a starvation policy, adding, “I guess they want to see us eating crickets instead of beef.”

“I actually think that if we use Justin Trudeau’s BS, we could probably fertilize our crops with that,” Loewen joked.

“Maybe the world couldn’t handle the crops with all that fertilizer.”

Former finance minister Travis Toews said the government will fail to deliver “unless board members, directors and department heads within the bureaucracy are completely and totally aligned with (the) government’s mandate.” He said it was a mistake the government didn’t require this alignment within its first month.

“There were mistakes made and we can never make those mistakes again, because we have a responsibility as elected members to deliver on the mandate that we promised Albertans during the campaign, and that means full alignment with senior bureaucrats,” he said.

Toews and Loewen went head to head on inflation and spending. Loewen said the UCP government spent more, noting the Alberta NDP’s last budget was $56 billion, while the UCP’s was $62 billion.

“That’s over 10% difference. And so we’re, we’re obviously spending more than the NDP did,” Loewen said.

Toews said “misinformation” is not helpful for Albertans. Additional pandemic costs were removed from operational spending which remained flat, he said.

Loewen responded that it’s “pretty easy” to separate “just one little thing” in the budget, but ultimately spending was higher in the UCP government.

UCP MLA Leela Aheer jumped in and said the operational spending was flat because the government “balanced the budget on the backs of our children, their education and our vulnerable.”

On education, Sawhney also said she would re-start the curriculum review which was implemented by Education Minister Adriana LaGrange. It was “controversial from the beginning,” Sawhney said.

“There are good elements to it, but obviously it hasn’t been rolled out properly,” she said.

Toews said he supports curriculum reform focused on disciplines of numeracy, literacy, and a fact-based education.

“Activist ideology has no place in a curriculum,” he said. “It has to be removed.”

“Buying into Trudeau’s Net Zero plan is very confusing for those of us, especially when you’re saying that you want to do things our own way,” Schulz said. “It doesn’t make sense.”

Schulz also said she would continue to suspend the fuel tax, and would take advice from Jean on his policies to make utilities more affordable.

There are 123,915 Albertans eligible to vote in the leadership contest. Members will elect a new leader and Premier on October 6.