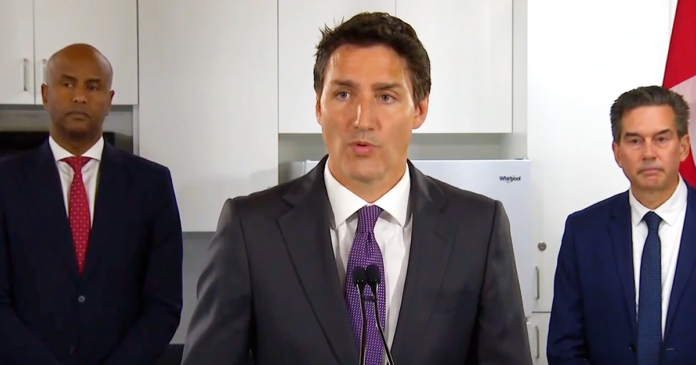 Prime Minister Justin Trudeau blamed the frustrations of struggling Canadians on “climate change” and “transformations of our economy” among other things.

Trudeau made the remarks Wednesday during a press conference alongside Minister of Housing and Diversity and Inclusion Ahmed Hussen, in which he announced a $2 billion housing plan.

“What do you think is behind the rise in threats that politicians are facing?” asked a reporter.

“Obviously the pandemic, increasing anxiety because of climate change, transformations of our economy, um, rise in mental health and addiction problems – particularly with the opioid crisis that has been ravaging communities right across the country,” replied Trudeau.

“It’s time for people to look to assuage fears and angers, to respond with a positive vision of the future. But people are hurting. People are hurting because of all these things we’re going through.”

Trudeau went on to encourage politicians to “make sure we are not inciting or encouraging anger or frustrations.”

“(We must be) actually putting forward concrete, real solutions that are gonna bring people along and allow them to see themselves in the future that the world is creating,” explained Trudeau.

Trudeau’s response comes as politicians on both sides of the aisle have faced incidents of harassment. The verbal assaults have prompted Public Safety Minister Marco Mendicino to increase security for politicians.

Throughout the pandemic, Trudeau alienated Canadians and dehumanizing the unvaccinated.

In Sept. 2021, the prime minister gave an interview with the French-language program La semaine des 4 Julie, in which he referred to the unvaccinated as “extremists” and “mysoginists.”

“They are extremists who don’t believe in science, they’re often misogynists, also often racists. It’s a small group that muscles in, and we have to make a choice in terms of leaders, in terms of the country,” said Trudeau.

“Do we tolerate these people? Or do we say, hey, most of the Quebecois people – 80% – are vaccinated. We want to come back to things we like doing. It’s not those people who are blocking us.”

Trudeau also referred to the Freedom Convoy as a “fringe minority” with “unacceptable views,” when the convoy made its way to Ottawa in January.

The Liberals have also painted opponents to their internet regulation bills as “extremists.”

“Again it seems that the members of the Conservative Party are listening to the most extremist element of their party, as they have on very important issues such as climate change or women’s right to choose,” said former minister of Canadian heritage Steven Guilbeault in response to criticisms of his internet regulation bill in Apr. 2021.