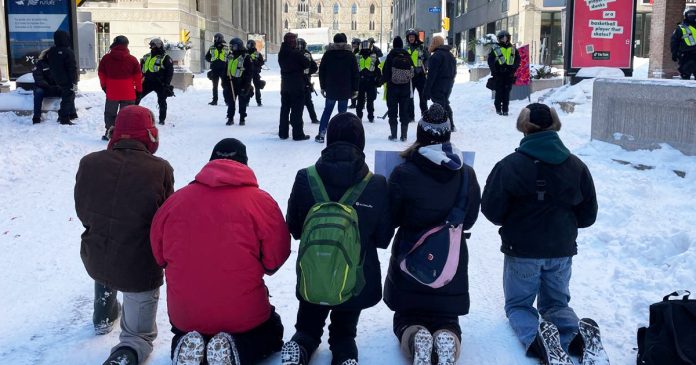 Most Canadians believe the Trudeau government overreached when invoking the Emergencies Act in February to clear peaceful Freedom Convoy protestors from Ottawa’s core.

According to Blacklock’s Reporter, an internal report provided to cabinet titled Continuous Qualitative Data Collection Of Canadians’ Views found that most Canadians actually supported the movement.

“Though a small number of participants felt implementing the Emergencies Act was a necessary step given the disturbance caused by the seemingly indefinite nature of the protests, most felt this action represented significant ‘over-reach’ by the federal government as they interpreted this as limiting the right of these Canadians to peaceful protest,” wrote researchers.

“A significant number identified with the frustration expressed by the protesters regarding ongoing public health measures even if they disagreed with some of the methods.”

Those polled also described that the protest was largely peaceful and an exercise of the right to freedom of expression.

The protest was declared illegal by federal and provincial authorities prior to Prime Minister Justin Trudeau’s unprecedented use of emergency powers.

“Among participants who were supportive of the protests and their aims it was felt the protests had been mostly peaceful and that these individuals had the right to express their opinion,” the internal report claimed.

“While some were hesitant to condone the disruption caused by the protests most of these participants felt the aim of the protest of ending Covid-19 mandates was justified and something they too supported.”

When it comes to the steps the government took to deal with the situation, including freezing bank accounts of protestors, some Canadians “expressed anxiety” over giving police these powers.

“Some participants were particularly unnerved by the reports of protesters and their supporters having their bank accounts frozen and expressed anxiety at law enforcement being imbued with this power,” wrote analysts.

“A few expressed a growing lack of trust in the federal government which they felt was limiting the rights of Canadians to protest in a peaceful manner and were concerned the Emergencies Act could be used routinely going forward to limit public dissent.”

Hearings for the commission investigating Trudeau’s invocation of the Emergencies Act have been postponed to October as Commissioner Paul Rouleau tends to an undisclosed medical situation.

Six weeks of hearings were supposed to commence September 19, but will now start October 13 and conclude November 25.