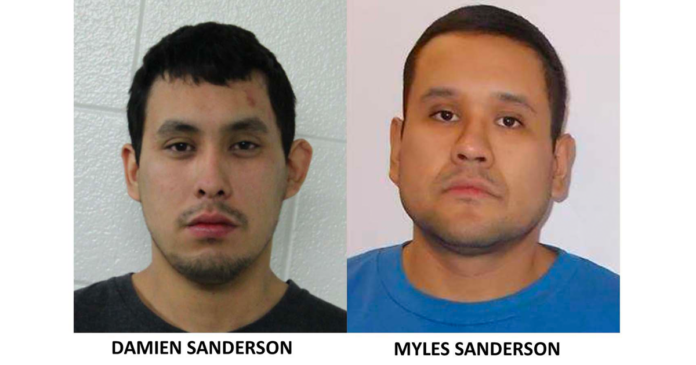 A province-wide manhunt for two suspects accused of killing 10 people and injuring at least 15 others in a series of stabbings in James Smith Cree Nation and Weldon, Saskatchewan is currently underway.

A dangerous persons alert has been issued by Melfort RCMP for two suspects identified by the RCMP as Damien Sanderson and Myles Sanderson.

The alert was later expanded to include Manitoba and Alberta.

The RCMP said the two male suspects are believed to be travelling in a black Nissan Rogue with Saskatchewan licence plate 119 MPI.

Myles Sanderson is listed as being 30 years old, six feet and one inch tall and 240 pounds, with brown hair and brown eyes.

The RCMP have yet to determine a motive for the stabbings and the police are urging all Saskatchewanians to remain vigilant.

“At this stage in our investigation, we believe some victims have been targeted by the suspect and others have been attacked randomly.”

The Saskatchewan RCMP in an update to Twitter urges the public to take “appropriate precautions” and “consider sheltering in place.”

“There may be additional injured victims who transported themselves to various hospitals,” Rhonda Blackmore, the commanding officer of the Saskatchewan RCMP, confirmed at a press conference.

The first RCMP alert was issued shortly after 7am local time and regular updates have been posted to the Saskatchewan RCMP Twitter account.

A state of emergency has been declared by the James Smith Cree Nation.

The scheduled Labour Day Classic CFL game between the Saskatchewan Roughriders and the Winnnipeg Blue Bombers will go ahead as planned with an additional police presence dispatched to Mosaic Stadium in Regina.

True North will update this story with more information as it becomes available.