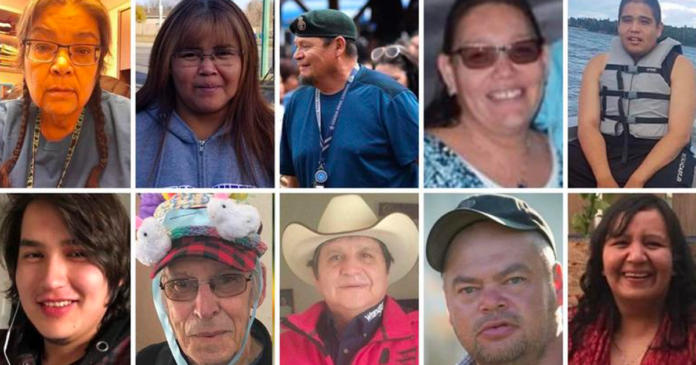 The names of the 10 victims brutally murdered in Canada’s largest ever stabbing spree were released by authorities prior to a press conference with the families of the slain.

Among the 10 dead were 28-year-old Gregory Burns and his 48-year-old mother Bonnie Goodvoice-Burns. 18 others have been injured due to the attack.

A majority of the victims killed were from James Smith Cree Nation, Saskatchewan, excluding Petterson who was from the nearby town of Weldon.

“The identities of injured persons will not be released. We can confirm one young teen was injured and the remaining injured are all adults. We will not be confirming other specific ages. Injured victims encompass both males and females,” wrote the RCMP.

A manhunt for 32-year-old suspect Myle Sanderson is currently underway. Sanderson is believed to have committed the crimes with his since deceased brother Damien Sanderson who was found dead on Monday.

Sanderson is wanted for multiple charges of first-degree murder, attempted murder and breaking and entering.

Mark Arcand, who is the brother of Bonnie Burns, said on Wednesday that he is trying to cope with the news of the incident.

“She was a member that made a difference in peoples’ lives … and the children always came first,” said Arcand.

“How can somebody do this to women and children? Words can’t express the pain that we’re feeling.”

Sanderson was known to police well before the September killing spree. Sanderson’s record includes 59 different convictions and in February the Parole Board of Canada declared that Sanderson was not a threat to public safety before letting him free from a prison term.

Sanderson was apprehended near Rosthern at 3:30 p.m. on Wednesday after issuing an emergency alert about a person armed with a knife travelling through the area in a vehicle.

His arrest prompts the ending of a multi-day manhunt.