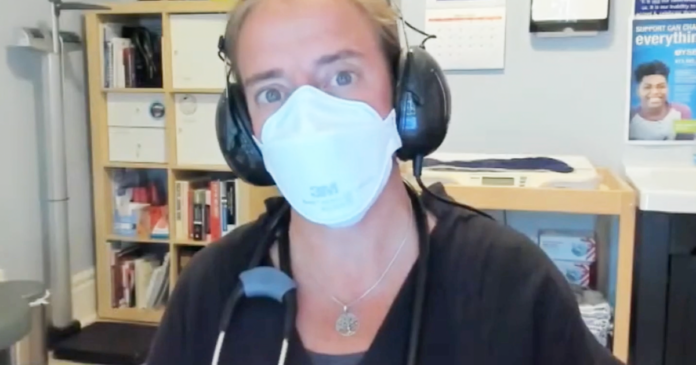 Ottawa family physician Nili Kaplan-Myrth started her Twitter day Wednesday by commenting about how angry she was with people who “foment hate and spread disinformation” and along with that, “pathetic misogynists who tone-police and insult” women and their education.

This was the morning after the night which this radical leftist doctor, self-described feminist and avid masker came on a TVO interview and fomented hate, spread disinformation, and rabidly insulted Dr. Matt Strauss, a critical care doctor who is acting medical officer of health of the Haldimand-Norfolk Health Unit.

Talk about being disconnected from one’s own self.

Kaplan-Myrth is running for Ottawa school trustee in Zone 9, which is in central Ottawa. The ward is currently held by rabid masker and the first trans trustee in Canada Lyra Evans, who has opted to run in another Ottawa ward.

About her run for trustee, Kaplan-Myrth said in a recent media interview that she wants to advocate on behalf of her vulnerable patients who have children in school, in addition to lobbying against all the “blatant anti-vaxxers and anti-maskers” (people she calls “abhorrent”).

It seems Evans and Kaplan-Myrth have much in common, in addition to their radical and regularly insufferable attacks on those with whom they disagree.

That may suit the Ottawa snowflakes, who were traumatized by the Freedom Convoy.

But Kaplan-Myrth’s online ratings as a doctor show a distinct pattern as of late. Words like “rude, unprofessional, self-righteous, fixated on vaccines and her Twitter rants” have been used to describe her lack of bedside manner.

Throughout Covid, she has regularly blocked a long list of those on Twitter who disagree with her (myself included) constant fearmongering.

The long-time doctor and would-be trustee appeared on TVO via Zoom wearing an N95 mask throughout the interview even though she was alone in her office, Her eyes appeared crazed as she called out Strauss and anyone who dared to disagree with her.

When host Steve Paikin asked her if things were “back to normal” in Ontario, she accused him of using “far right language of anti-maskers and anti-vaxxers” who have disregarded the impact of Covid on seniors, health care workers and so on.

When Strauss suggested that most Ontarians yearn to get back to normal – and there’s nothing far right about that – Kaplan-Myrth insisted that we should still be masking indoors and in large crowds outdoors.

She even claimed that the politicians have “pandered” to a very small group (the Freedom Convoy) who occupied Ottawa’s streets and spread misinformation on social media and in other “rag magazines.”

She also contended that Premier Doug Ford has not come out and told people they should take all the vaccines for which they are eligible (including boosters for small children).

So much for free will.

Using the typical leftist talking points, Kaplan-Myrth attacked the trolls who say she fearmongers, saying she is just trying to encourage people to take care of each other.

“It is inappropriate to say that masks are some form of hardship…they are not cruelty … they are not restricting people’s ability to make friends to play, to work, to do any of these things,” she lectured, aiming her venom at Strauss.

“What you are saying is based on right-wing, anti-mask anti-vax ideology.”

Kaplan-Mryth nearly lost it when she claimed she “cares deeply” about her patients and that it’s time for civic responsibility. She reiterated that message more than once, her face (or at least what one could see of it) turning bright red.

If radical wokeness, self-righteousness, rudeness and disrespect for an alternative point of view are prerequisites for school trustee in woke Ottawa, Kaplan-Mryth will fit right in.

But given her performance this week, her perceived self-importance, her over-the-top hysteria, her N95 mask theatrics and her smug disdain for an alternate point of view, it is perfectly fair for one to wonder whether she really cares deeply for her patients and kids in the school system.

It could equally be said that Covid has given her a platform and a soapbox – and she cares as much if not more, about losing that.

It sounds cynical, but after more than two years of lockdowns, public health fearmongers like her and the politicians who yap constantly at us about vaccines, how many of us simply tune out.

I’m with Strauss. We all want to return to some semblance of normal.