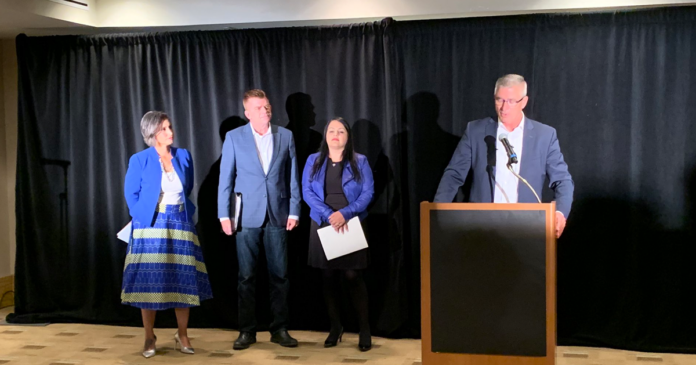 Travis Toews, Brian Jean, Rajan Sawhney and Leela Aheer hosted a press conference on Thursday to show their unity in opposition to the proposal — the pinnacle of Smith’s campaign which would bar federal legislation deemed harmful to Alberta’s interests. Rebecca Schulz and Todd Loewen did not attend.

The Sovereignty Act will not do what Smith says it will do, Jean argued.

“(Smith) is telling voters that she has a magic wand that changes how law jurisdiction and how economics all work.”

Toews said the act will undermine trust in Albertans and chase away investment. Sawhney said the act is flirting with separatism.

Aheer said the proposal is an attack on Albertan values. Smith is playing with fire and “selling a fantasy to her supporters,” she said.

Jean said all candidates besides Smith were invited to the event. He said some agreed to attend, but then backed out. It was a political decision, he said.

Following the press conference, Schulz released a statement on why she declined to attend. She said she doesn’t support the act because it “doesn’t do what people say it’s going to do.” She also said it’s not good for unity as it’s already created much division amongst UCP members.

She did not say whether she would vote for the Sovereignty Act if it reached the Legislature floor.

In a video posted to social media, Loewen said the press conference showed “disunity and desperation.”

“I wish those candidates would stand up against (Prime Minister Justin) Trudeau as strong as they stand against the Sovereignty Act,” he said.

Loewen supports the principle of the act, but doesn’t think it’s necessary to say “no” to Ottawa.

Smith responded to the press conference in an emailed statement, saying she respects her opponents’ right to speak in opposition to the proposal.

She also said she’s excited to give Albertans the opportunity to put Ottawa “back into their own lane.”

Smith said she trusts the judgment of the UCP membership to select the leader they feel will best defend them “against Ottawa’s continued unconstitutional attacks against our province.”

“I will respect their decision when it is made. I would expect my future caucus colleagues to do the same.”