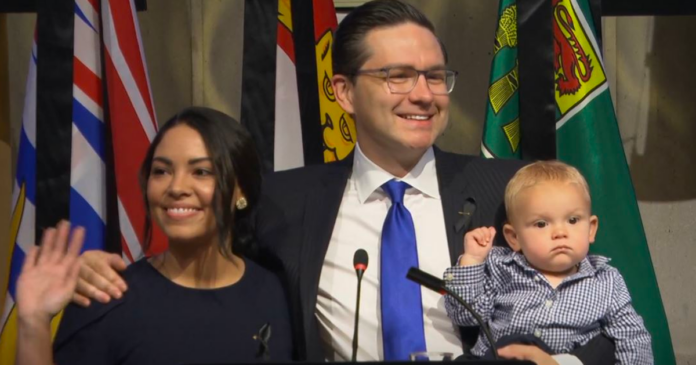 In his first address to the Conservative caucus since Saturday’s decisive leadership victory, Poilievre called any new taxes “reckless for the future” of Canada’s economy and pledged to advocate for more accountability from the federal government.

“If you understand that people can’t gas their cars, feed their families, or afford homes for themselves, if you really care, commit today, that their will be no new tax increases on workers and on seniors,” Poilievre said.

“It is not only reckless for the future, but it is too expensive for the present to continue to pile on these debts.  So that is why Conservatives offer practical solutions, like requiring the government follow the same rules families follow in their household budgets.”

Poilievre made the statement alongside his wife Anand Poilievre, who also celebrated their one-year-old son Cruz’s birthday with a cake.

Poilievre’s plan was praised by Canadian Taxpayers Federation Federal Director Franco Terrazzano on the night of his victory.

Monday’s first statement as leader of the Conservatives echoed many of the concerns he mentioned in his weekend victory speech.

“Today people feel like they’ve lost control of their pocketbooks and their lives. The cost of government is driving up the cost of living,” said Poilievre on Saturday.

Prior to his election, Poilievre promised he would institute tax reform if elected prime minister. His platform pledged to simplify the tax filing process, cut income taxes and more.