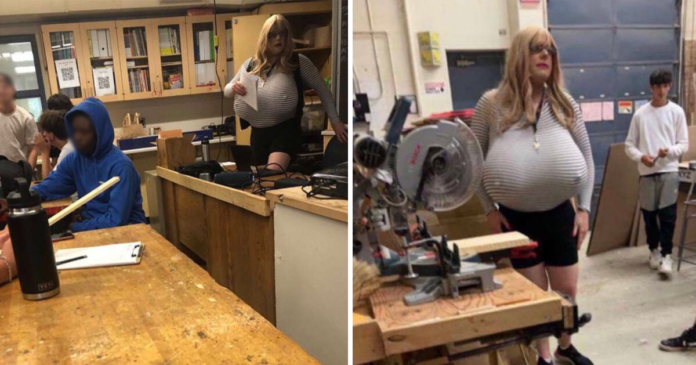 EDITOR’S NOTE: This article has been updated to reflect the fact that in an earlier version of this story, the teacher was identified incorrectly. True North regrets this error.

The teacher, Kayla Lemieux, was photographed in the shop class she teaches at Oakville Trafalgar High School wearing what appears to be a busty prosthetic under very tight shirts – showing fake nipples – along with biking shorts and blond hair (likely a wig).

She is seen in class both speaking and demonstrating wood-cutting on a saw while her fake breasts hover dangerously close. Other shots show her walking both inside the halls of the school and outside wearing a purple mask to match her tight shirt.

According to websites selling these prosthetic breasts, the largest pair can weigh up to 35 pounds (16,000 grams).

Both Lemieux and the school’s principal Meredith Cammisuli did not respond to a True North request for comment on the appropriateness of her presentation.

But on Friday afternoon, the school removed the list of staff and their e-mail addresses from its website.

At first, many Twitter users believed the pictures to be a parody given their outrageousness. But it would appear students in her shop class took the photos and vouched for their authenticity.

Although somewhat quieter than other Ontario school boards, the Halton District School Board (HDSB) appears to be no less woke.

The board’s recently appointed director, Curtis Ennis, came directly from the Toronto District School Board, which has taken a leadership role in its effort to push radical gender and anti-black racism ideologies.

The HDSB’s Gender Expression policy, created in October of 2021 indicates that students and staff have a right to equitable treatment based on gender identity and gender expression.

“The HDSB is committed to establishing and maintaining a safe, caring, inclusive, equitable and welcoming learning and working environment for all members of the school community – staff included – who identify as transgender.

Under dress codes, the policy states that all students should be permitted to wear the clothing of their choice, provided that the clothing “does not violate” the school’s dress code.

That section indicates dress codes will be developed permitting students to express their gender identity.

There is no indication in this policy what constitutes a suitable dress code for transgendered teachers.

But one does not need to be a rocket scientist to suggest that coming to school dressed like an outrageous drag queen – whether a man who identifies as female or a biological female – is highly inappropriate.

Lemieux may have felt the need to make a statement but her “coming out” as a female is obscene, not at all conducive to classroom learning.

Most Twitter commenters agreed that they don’t care whether a teacher is transgendered but Lemieux’s choices are beyond the pale.

Instead of hiding behind their gender policy or removing the names of staff people from the Oakville-Trafalgar High School website, it would be nice to see the HDSB act as adults and take a measured common sense approach to this teacher.

At the moment, if we had to give this school marks for its mishandling of the situation, it would be double F.