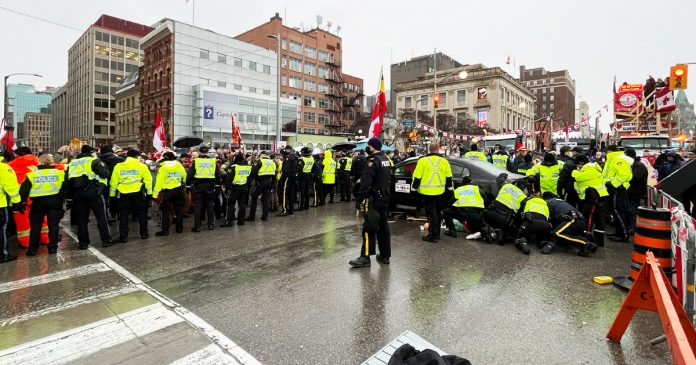 The Ottawa Police Service (OPS) is charging their own Constable Kristina Neilson with discreditable conduct for donating to the Freedom Convoy’s GiveSendGo fundraising campaign in February.

Last month, the allegation served to the officer states that Neilson knew the Freedom Convoy was an “illegal occupation” but donated to their GiveSendGo campaign anyway.

The Freedom Convoy began its fundraising effort on GoFundMe, raising millions of dollars before being shut down at the behest of the Ontario government.

As stated in the OPS’s notice of disciplinary hearing, Neilson allegedly donated to the “Freedom Convoy Fund” on GiveSendGo on February 5th.

OPS claims that the donation to the Freedom Convoy’s fundraiser was “acting in a disorderly manner” and that she should have reasonably known that donating to the convoy amounted to financial support of the “illegal occupation.”

Although OPS asserts that on February 5th Neilson should have known that donating to the Freedom Convoy was supporting an “illegal occupation,” the donation was before law enforcement began cracking down on the protest.

At the time of Neilson’s donation, the Freedom Convoy was entering the second week of rolling protests at Parliament Hill, with convoy organizers co-operating with an Ontario Provincial Police liaison on a daily basis.

Neilson’s donation was made before an Ontario judge placed a nationwide ban on Freedom Convoy funds from GiveSendGo and ​​before the Trudeau government invoked the Emergencies Act to stop the truckers.

OPS interim police chief made clear in March that there is no place in the force for officers who have donated to the Freedom Convoy and that officers who did donate to the convoy were being investigated.

“We need to deal with the people who supported it, because there’s no room for them,” said Bell in a March comment.