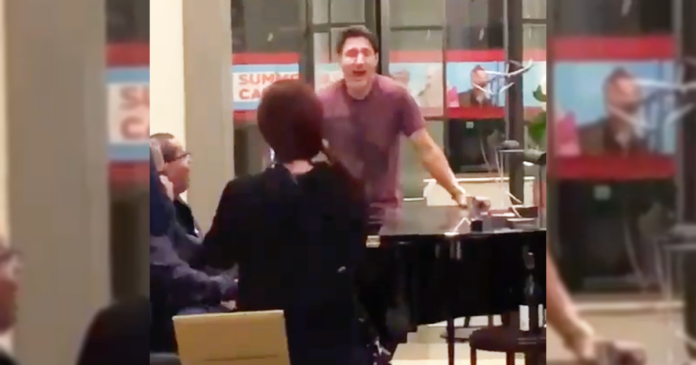 While in London to represent Canada at Queen Elizabeth II’s state funeral, Prime Minister Justin Trudeau was spotted in the lobby of the Corinthia Hotel singing ‘Bohemian Rhapsody.’

Twitter user @LisaPow33260238 first uploaded the clip of a casually-dressed Trudeau with a group of individuals singing the popular Queen song.

While some users questioned the authenticity of the clip, the Prime Minister’s Office (PMO) confirmed to Toronto Sun journalist Joe Warmington that the clip is in fact real.

“After dinner on Saturday, Prime Minister joined a small gathering with members of the Canadian delegation, who have come together to pay tribute to the life and service of Her Majesty,” the PMO’s Lead Press Secretary Ann-Clara Vaillancourt said in a statement.

“Gregory Charles, a renowned musician from Quebec and Order of Canada recipient, played piano in the hotel lobby which resulted in some members of the delegation including prime minister joining.”

Many users on social media reacted negatively to the clip of Trudeau singing joyfully while in London for the Queen’s funeral.

“Given the magnitude of the Queens funeral, given he’s suppose[d] to be representing [Canada], I’m no prude but pls, some decorum & respect at least for a day. It’s always got to be about him #TrudeauMustGo,” tweeted @Victoria59L in response to the video.

“Like having a bachelor party on the eve of your wedding. Very poor taste. He wouldn’t know that tho,” tweeted @KHannise.”

No other clips of members of Canada’s delegation to the state funeral singing and carousing have surfaced.

This isn’t the first time Trudeau has made embarrassed Canada while abroad.

In 2018, while in India, Trudeau showed off his bhangra dance moves in front of an Indian crowd at a public event. The prime minister was also ridiculed for inviting a convicted terrorist to a state dinner on the same trip.

In 2017, Trudeau infuriated leaders of 10 Asia-Pacific countries by not showing up for the signing of a lucrative trade deal. An official familiar with the trade deal said, “the Canadians screwed everybody” following Trudeau’s no-show.