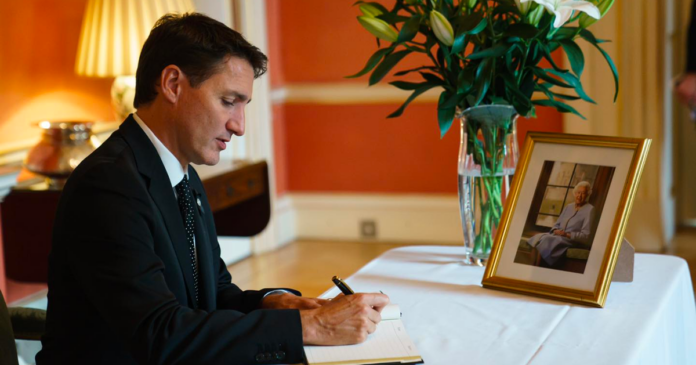 While media outlets in the United Kingdom and the United States blasted Justin Trudeau for his “drunk” rendition of ‘Bohemian Rhapsody’ while in London for the Queen’s state funeral, legacy media journalists in Canada rushed to defend the prime minister’s actions.

On Monday, Twitter user @LisaPow33260238 first uploaded a clip of a casually-dressed Trudeau with a group of individuals singing the popular Queen song.

While some users questioned the authenticity of the clip, the Prime Minister’s Office confirmed to Toronto Sun journalist Joe Warmington that the clip was in fact real and was filmed just two nights before Her Late Majesty’s funeral.

A number of journalists at the CBC, Global News, CTV News and the Toronto Star were quick to downplay Trudeau’s latest international blunder.

The CBC’s senior writer Aaron Wherry claimed nobody “truly and genuinely cares about the prime minister singing in a hotel lobby on Saturday night.”

Meanwhile, CTV News claimed Trudeau’s antics were “in tribute to the late Queen Elizabeth,” though there was no indication that the prime minister’s rendition of ‘Bohemian Rhapsody’ was for the Queen, who was not a member of the British rock group despite its regal name.

At Global News, instead of criticizing the prime minister’s actions, Rachel Gilmore attempted to fact-check the user who first uploaded the clip. “The viral tweet got some key things wrong,” Gilmore tweeted.

The Toronto Star’s national columnist Althia Raj attempted to downplay the incident by tweeting, “I feel very privileged to live in a country where the most controversial thing to have happened today is footage of the prime minister singing on Saturday night with a Quebec icon in the lobby of a hotel while in London for the Queen’s funeral. #perspective.”

Journalists in the United Kingdom, meanwhile, were not as kind to Trudeau. As the clip of Canada’s prime minister went viral, a number of UK media outlets published scathing reports about the incident.

The UK’s highest-circulated daily newspaper The Daily Mail reported on the incident with the headline: “’Drunk’ Canadian PM Trudeau is slammed as a ‘tone deaf embarrassment’ for singing Queen’s Bohemian Rhapsody at London hotel before Elizabeth II’s state funeral.”

“The Prime Minister of Canada belted out the 1975 hit at an impromptu session in London’s swanky Corinthia Hotel – where suites go for at least $5,000 – while the UK and Commonwealth were in their official period of mourning.”

Another well-known UK media outlet The Telegraph described the incident as “disrespectful” and “failing to show ‘decorum’” in response to the incident.

BBC News’ Elsa Maishman gave a balanced report on the incident, highlighting those criticizing the prime minister and those who believe the incident had been “exaggerated.”

A number of Canadian media outlets receive funding from the government as part of the Trudeau government’s $600 million media bailout and other handouts. Canada’s state broadcaster the CBC receives a $1.5 annual grant from the federal government.