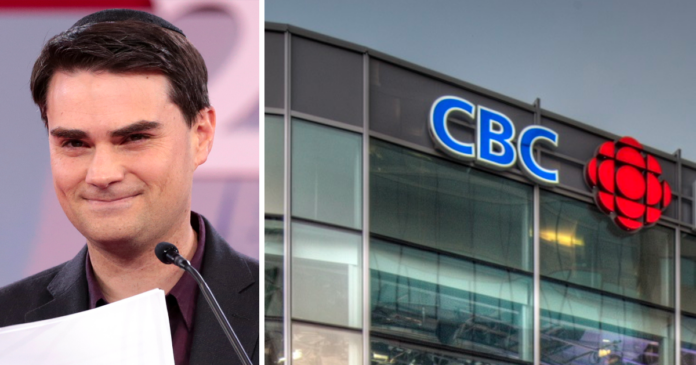 The CBC story claims Shapiro’s “views are controversial — and some are outright discriminatory.” The reporter says Shapiro’s assertion that “transgender people suffer from a ‘mental disorder’” is an example of discrimination.

Gender dysphoria is listed in the DSM, the authority used by mental health practitioners to diagnose psychiatric conditions.

The story concedes that “Shapiro is not affiliated with any hate group,” however he claims “experts in media, gender studies and the radicalization of young men say that the commentator’s content is prevalent in online extremist communities.”

The CBC article asserted that Shaprio was somehow connected “to controversial — and increasingly harmful — views about masculinity, the objectification of women and the LGBT community.”

Following the report, Shapiro took to Instagram to respond to the allegations made by Canada’s state broadcaster.

“Here comes the media attempt to get me banned from social media,” Shapiro wrote.

“They can’t name which views of mine are particularly radical, so they just go for the ‘I’m radicalizing the youths!’ Pathetic garbage from Canada’s public broadcaster.”

Shapiro goes on to say that he found it “strange” that the CBC would allege that he has views that objectify women considering he is “an Orthodox Jew who promotes virginity until marriage.”

The American political commentator then challenged the CBC to specify exactly what are his “Bad Views™” on masculinity.

“That men should be responsible? That they should get jobs, get married and take of their children? Sound Very Very Bad™!”

Shapiro then defended his views on marriage and the claim that his views were discriminatory towards the LGBT community.

“I suppose my Bad Views™ is that natural law views of human sexual behavior and its moral component are correct,” Shapiro wrote.

“This is the part that is unacceptable: that I believe married heterosexual activity is morally superior to all other types of sexual activity. Well tough s***. It is.”

Shapiro founded The Daily Wire and hosts The Ben Shapiro Show. The daily podcast is one of the most popular podcasts in North America.