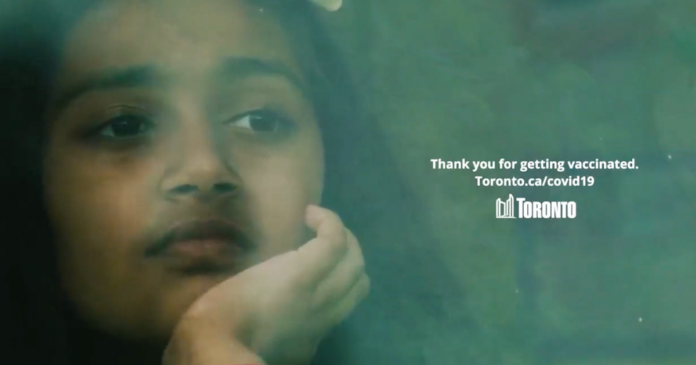 The City of Toronto says it wants to “ensure greater clarity” after facing criticism for an online ad campaign promoting Covid-19 vaccination for children as young as six months old.

In one ad, a young girl looks out her window at other children playing and asks her mother if she can join them.

“No honey,” the mother replies from offscreen. “There’s still something going around.”

“Okay,” the girl replies, as she sadly looks back out the window as text flashes onto the screen:

“Kids should be out there. Not in here. Covid-19 vaccines available for children 6 months to 12 years.”

After the video was widely panned on Twitter for implying unvaccinated children should be kept away from their friends, the City of Toronto deleted a tweet with the video and published a retraction, though not an apology.

“The City removed a tweet and video from earlier today,” the retraction said. “We always strive to ensure clear understanding, especially about vaccinations, and will work to ensure greater clarity in the future.”

City of Toronto spokesperson Brad Ross told Toronto Sun reporter Joe Warmington that the campaign “was intended to highlight the negative impact (the pandemic) has had on children and drive home the benefits of vaccine, as vaccination remains the most effective way to protect our children, families, communities and ourselves against the serious effects of Covid-19.”

“We do believe we can better communicate this intent and, as such, we have removed the video to better address the core message of children being eligible to be vaccinated against COVID-19,” Ross said.

However, a suite of related videos continues to be available on the City of Toronto’s YouTube channel. These videos all have a similar tone and message.

In one, a voice is heard offscreen cooing over a newborn. Eventually the camera shows that the voice is coming through someone on the other end of a video call with the infant.

This video isn’t a one-off. It’s part of a multi-part campaign. In this video, the City of Toronto suggests you should keep family members from your infant unless the infant is vaccinated. pic.twitter.com/jTvCXIWqws

“Don’t miss these moments,” the screen says. “Get connected (in real life). Covid-19 vaccines available for children 6 months to 12 years.”

In another video, a young girl barges into a room while her mother is chairing a virtual meeting.

In this edition of the City of Toronto’s child vaccination campaign, you have to vaccinate your child so they can leave your house for school while you work from home. pic.twitter.com/50xU6tXxmR

“She should be in school,” the screen tells viewers. “Covid-19 vaccines available for children 6 months to 12 years.”

Covid vaccines are not required to attend elementary or secondary schools in Ontario.

Ross said in his statement to Warmington that the videos were “created by staff and community ambassadors,” and that elected officials, such as Toronto Mayor John Tory, “were not involved in any way.”