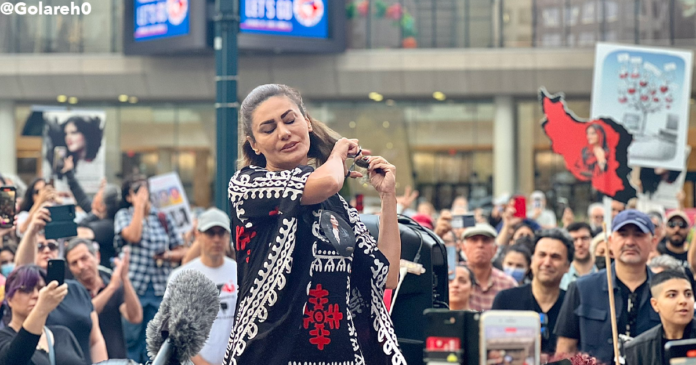 Iranians across Canada are calling on world governments to act as Iran plunges into protests over the death of 22-year-old Mahsa Amini while in police custody.

Protests took place in Toronto and Vancouver with supporters bearing photos of Amini. Amini was arrested by Iran’s morality police on Sept. 13 for allegedly violating the country’s mandatory veiling laws.

It was revealed that Amini had died three days after her arrest due to what authorities claim was a heart attack.

Iranians have come out in droves across the country to voice their opposition to Amini’s death. Three protestors have since been shot dead by Iranian police including in Urmia, Kermanshah and Piranshahr.

Videos of Iranian women removing or burning their hijabs have been circulating.

Iranian President Ebrahim Raisi is scheduled to appear before the UN General Assembly in New York later this week.

“Ms. Amini’s tragic death and allegations must be promptly, impartially and effectively investigated by an independent competent authority that ensures in particular that her family has access to justice and the truth,” Al-Nashif said.

The Trudeau government is currently facing criticism for allowing the son of Iranian vice president Ensiah Khazali to live in Canada and operate a virtual private network business.

“Canada does not limit the number of temporary resident visa applications that are accepted from any country,” said Immigration Refugees and Citizenship Canada official Aidan Strickland.

“Temporary resident visa applications are considered on a case-by-case basis on the specific facts presented by the applicant.”

On Twitter, Conservative deputy leader Melissa Lantsman called on the federal government to follow through with a 2018 vote and finally declare the Islamic Revolutionary Guard Corps a terrorist organization.