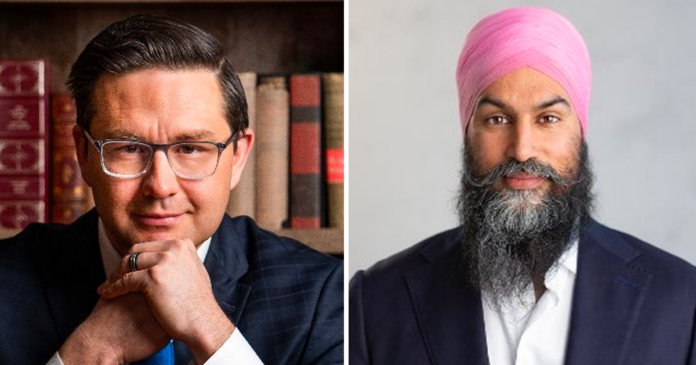 Shortly after parliamentarians returned to the House of Commons this week, Singh claimed that his priorities were diametrically opposed to the Conservative leader’s.

“I don’t see a way to work together with someone who is so fundamentally opposed to making life better for people,” said Singh while fielding questions from reporters on Tuesday.

“It’s clear that his priorities are very different. He has sided with wealthy CEOs (and against) the idea of making them pay their fair share or pay what they owe. We believe that CEOs should pay what they owe. He’s voted against minimum salary to make sure workers get respect and dignity. I think workers should get good salaries.”

“It seems like a bit of a weak approach to then make it into someone’s partisan political position. I think it is an example of a lack of his strength to be able to stand up and say what you want and defend your position.”

“If there’s a continuance of the circus, then they’ll have to see who will buy tickets. I don’t think that’s what people want. But I’m not the Conservative party, so all I can say is what we’re going to do, and what we’re going to do every single day is come here and do the best of our ability,” Singh continued.

The NDP recently launched an attack ad aimed at Poilievre. The video asks, “Who is the real Pierre Poilievre?” and claims that he’s a “friend of big business and the corporate elite.”

In March, Singh and Prime Minister Justin Trudeau formed a coalition, with the NDP demanding that the ruling Liberals deliver on policy promises like universal dental and pharmacare in exchange for parliamentary support.

On his first day in the House of Commons as leader of the official opposition, Poilievre demanded tax cuts for Canadians and went after the Liberals over inflation yesterday.

“People cannot even afford to have a family in the first place, because they cannot get out of their parents’ basements or out of 400-square-foot apartments after housing prices have literally doubled in this country under the Prime Minister,” said Poilievre during Question Period.

“Now, with rising interest rates, which the government promised would not happen any time soon, families have to spend 50% of their income, the highest in over three decades, just to keep a roof over their heads. The solution from the Liberals is higher taxes on gas, groceries and paycheques.”