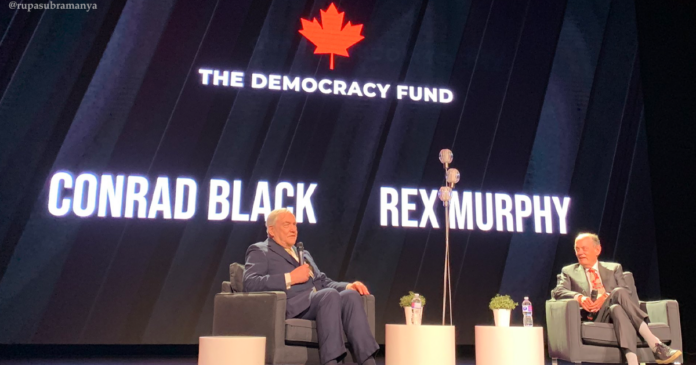 Columnists and authors Conrad Black and Rex Murphy have blamed the regrettable state of Canadian civil liberties on the “incompetent” and “stupid” legacy media.

Black and Murphy were both keynote speakers at the Democracy Fund’s event The History of Civil Liberties in Canada held at the Canada Christian College in Whitby, Ontario.

After quickly summarizing Canada’s exemplary historical role in dismantling the transcontinental slave trade and boldly challenging the idea that Canada is a “systemically racist” country, Black and Murphy took aim at the legacy media.

During his remarks, Black, the former owner of the National Post and current historian-in-residence with The Democracy Fund, said the legacy media is one of the main threats to civil liberties in Canada.

“One of the threats to our civil rights in this country is the utterly, unacceptably, incompetant performance of 90% of our media in this country,” Black said.

“It seems to me that at least a good portion of the Ottawa Press Gallery has come to the determination that its main function is to act as an opposition to the Leader of the Opposition,” said Murphy.

“If you are concerned with civil liberties and the operation of a democracy, if the press is deliberately corrupt or corrupt from simple inadequacy, then our democratic system will fall.”

Murphy was particularly critical of Canada’s state broadcaster, referring to the CBC as an organization that “frowns on overt signs of competence.”

Murphy referenced the viral story of the transgender shop class teacher in Oakville who wore giant prosthetic breasts and noted that international media was ridiculing Canada while Canadian outlets like the CBC have completely abandoned the story.

“That story is in the Telegraph, The Independent, it’s on the BBC, it’s in the New York Post, it has been on Fox News, it’s all over the world,” Murphy said. “Go home tonight and go to CBC, CTV, or Global and type in Oakville Trafalgar High School blimps and you will not get very much news.”

The two authors touched on a variety of subjects pertaining to civil liberties throughout the evening, including the decline of Canada’s education system.

“We cannot have school boards continue to abandon the whole idea of education so that they can give themselves the power to shape minds according to their tiny minds,” Murphy said.

Meanwhile, Black says “the greatest irony is that we spend more and more and more on education and get less and less well-educated.” He even went as far as to call Canada’s public schools “glorified daycare centres.”

As a parting message, Murphy implored those in attendance to speak up for what they believe in and not to wait for others.

Before Murphy and Black took the stage, the crowd of several hundred gave a standing ovation to Freedom Convoy organizer Tamara Lich who was also in attendance for the event.