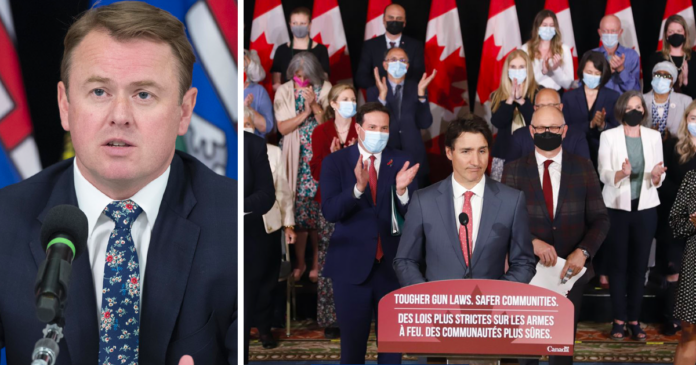 Those firearms were purchased legally and the province will not aid the federal government in confiscating them, Shandro said. The province will also go a step further and seek to intervene in six ongoing judicial review applications challenging the constitutionality of the federal firearm prohibition legislation, he said.

“As intervenors, we would be able to offer the Court arguments based on the specific challenges that the federal legislation has created for Alberta’s law abiding firearms community and advanced legal arguments that the federal government has overreached with its plan to ban 1500 models of firearms,” the minister said.

In May 2020, Prime Minister Justin Trudeau announced he was banning more than 1,500 models of firearms, including AR-15s. Owners of these guns would have a two-year amnesty period to come into compliance with the prohibition, he said at the time.

The Liberals said they plan on spending up to $250 million buying back the guns.

In March, the federal government extended the amnesty period for 2,015 banned firearms — a move the industry says it expected due to the “staggering costs and enormous manpower” Ottawa requires to confiscate the property.

The Liberal government said the order, set to expire in April, would be extended until October 2023.

Shandro said the province also learned the federal government intends to conscript provincial RCMP officers to act as confiscation agents as part of its “buyback program.”

“Alberta taxpayers pay over $750 million per year for the RCMP and we will not tolerate taking officers off the streets, in order to confiscate the property of law-abiding firearms owners,” Shandro said.

In response, Shandro said he used authorities under the Provincial Police Service Agreement — the agreement Alberta has with the federal government to contract provincial policing.

The Minister said he wrote to the commanding officer of the RCMP in Alberta to formally identify the confiscation program as an activity that is not “objective priority or goal of the province or the Provincial Police Service” and that the use of RCMP resources would be contrary to the effective and efficient delivery of police services.

“Consequently, the RCMP should refuse to participate,” Shandro said.

If the federal government still directs RCMP to serve as confiscation agents, Alberta will formally dispute any attempt to do so by invoking the dispute resolution clause in Article 23 of the Provincial Police Service Agreement, Shandro said.

Shandro said Ottawa’s confiscation is politically-motivated and will do nothing to make Alberta a safer place or to reduce the criminal misuse of firearms. Ottawa’s move to label firearms as “assault” weapons is a label “designed to scare Canadians who are unfamiliar with firearms,” Shandro said.

“In the description based purely on their appearance, and not on any unusual danger that they pose or mechanical capability that they possess,” he said.