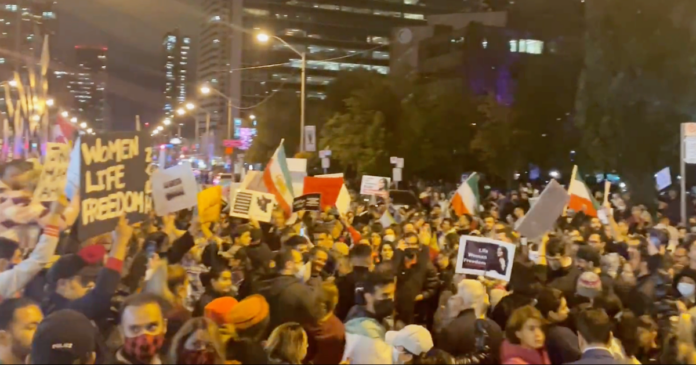 Iranian-Canadians held more protests this weekend in solidarity with women protesting the country’s Islamist theocracy over the death of 22-year-old Mahsa Amini while in police custody.

Protests took place across Canada, including in Vancouver, Calgary, Montreal and Toronto.

Deputy Conservative leader Melissa Lantsman was among those who joined protests in Toronto this weekend.

“A brutal regime killed a 22-year-old girl,” said Lantsman to the large crowd.

“You have friends in the Conservative party. You have friends who are going to stand up to this government and demand that the (Iranian Revolutionary Guard Corps) is a listed terrorist organization.”

Amini is believed to have died after being arrested by authorities for violating mandatory hijab rules.

On Monday, Prime Minister Justin Trudeau was prompted to announce a series of new sanctions against the Iranian regime as a result of the growing movement to overturn the country’s forced veiling laws.

“We’ve seen Iran disregarding human rights time and time again, and now we see with the death of Mahsa Amini and the crackdown on protests,” said Trudeau.

“To the women in Iran who are protesting and to those who are supporting you, we stand with you. We join our voices, the voices of all Canadians, to the millions of people around the world demanding that the Iranian government listen to their people, end their repression of freedoms and rights, and let women and all Iranians live their lives and express themselves peacefully.”

The new sanctions aim to target “dozens of individuals and entities, including Iran’s so-called morality police.”

An official copy of the sanctions has yet to be released by Global Affairs Canada.

Protests have rocked major cities throughout Iran for nearly two weeks with official reports indicating that 41 people have died as a result of clashes with police.