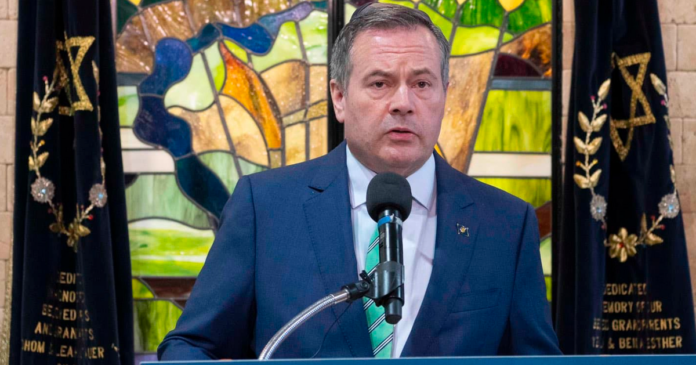 Alberta Premier Jason Kenney says the state of conservatism is “populism with a snarl.”

Kenney made the comments during a panel with Sean Speer at the Canada Strong and Free Conference in Red Deer on Saturday.

This is “not healthy for our society” and it’s not conservatism, Kenney said, adding that civility is good for Canadian institutions and society.

The populism he’s seeing could result in a situation where what is winsome and appealing about conservatism could become a caricature of a kind of nasty, angry populism that will “lose constantly at the polls as well,” Kenney said.

He also said the Covid-19 pandemic hyper charged all that anger. The premier has largely attributed lasting anger over his pandemic policies as the reason for his impending resignation.

Kenney has just days left in the province’s top job before a new United Conservative Party leader and premier is announced on October 6. He’s not yet said what he plans to do next.

Instead, he reflected on his time as the federal Immigration Minister in former prime minister Stephen Harper’s government.

In this role, Kenney said he called out things like a lack of integration, a lack of civic literacy and immigration fraud. He said he implemented some policies that were contentious but successful, like when he advocated for people to show their faces during citizenship ceremonies.

His message to the next generation of conservatives is “you have to take the time” to build meaningful relationships with immigrants and ethnic communities, Kenney said. You can’t just do a token visit six months before an election, he said.

Kenney said Alberta is growing more urban and there’s a widening gulf between the political cultures.

“It’s the job of any leader to bridge that divide,” he said.

The premier also said he travelled to the UK to pay his respects to Queen Elizabeth II who passed at 96 earlier this month because he “just felt compelled.” She’s been a singular example of dignified public service without any of the “rubbish” that comes with politics, he said.

“It was for me, a pilgrimage of sorts,” he said, adding that was likely the sense for everyone in the hour-long queue waiting to pay their respects to the Queen.