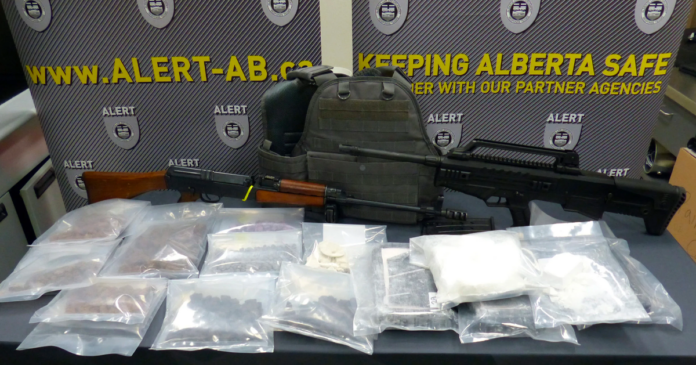 An international operation titled Project Cobra led to one of the largest drug busts in Alberta’s history.

With law enforcement agencies from across Canada and the US collaborating, authorities were able to seize $55 million worth of cocaine and methamphetamines.

According to the Alberta Law Enforcement Response Team (ALERT), busts targeting two mansions in Ontario and Nova Scotia as well as 11 vehicles turned up 19 firearms. A total of 15 individuals are facing 80 charges.

Police officers from the RCMP, the Calgary Police Service, the Edmonton Police Service and the US Drug Enforcement Administration were involved in the operation.

“We’ve heard the saying cutting the head off the snake in order to cripple a criminal network. Well, Project Cobra didn’t just cut off the head of the snake, these dedicated men and women took the whole damn snake,” said ALERT CEO March Cochlin.

“The numbers are staggering. 55 million in drugs intercepted. Nearly one metric tonne of methamphetamine that was destined for Alberta communities. The amount of harm that mountain of meth brings to our communities is very disturbing.”

According to primary investigator Tara McGill. the drugs were likely sourced from Mexican cartels.

“The criminal organization . . . operated at an extremely complex, sophisticated level,” said McGill. “A Calgary-based business was also charged with laundering the proceeds of crime.”

“It began from intelligence-led policing. Information that there were drug traffickers involved in the importation of meth into Canada. Eventually, the investigation itself revealed that it was transnational, it was larger than anything that we had actually anticipated,” explained McGill.

The organization Fouani Equity Funds Ltd. is also facing charges for participating in a criminal organization.