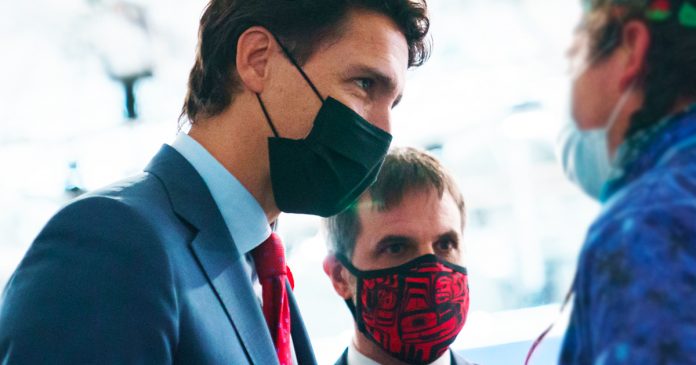 We’ve had a lot of dingers come out of the halls of Parliament since Justin Trudeau became prime minister in 2015.

“The budget will balance itself.”

“The government took on debt so Canadians wouldn’t have to.”

Maybe you can chalk them up to speaking off the cuff, or being caught at a bad moment. Sure. We all have our bad days.

But sometimes the Trudeau Liberals really have no excuse.

And that is the case with the latest statement coming from our CN-tower-climbing Environment Minister, Steven Guilbeault, on the carbon tax. He managed to reach a whole new level of government new-speak which would have George Orwell turning over so fast in his grave you could generate electricity off of it.

For some background: the Conservative opposition is advocating for the government to pause any further increases to the harmful carbon tax which has been costing Canadians severely at the pump and on most other bills for a long time now.

The Conservatives are joined in this effort by advocacy groups, as well as provincial governments across Canada, including Newfoundland & Labrador Liberal Premier Andrew Furey.

The government’s response to Canadians begging for help was swift: “No.”

Among the many “no’s” given to Canadians from various members of the government, the most interesting and mind-boggling came in the form of a video response posted to Twitter by the aforementioned Steven Guilbeault. He said the following:

“By trying to cancel the price on pollution today, Pierre Poilievre has made his priorities clear; he would make it free to pollute again, while taking away hundreds of dollars from Canadian families.”

It is really one of the most out-of-touch statements I’ve ever seen from a government minister.

Guilbeault is trying to argue that by cutting the carbon tax, it will somehow result in Canadians having less money.

This isn’t an off-the-cuff statement. He wrote this out, recorded this video, and hit send on the tweet. It went through too many possible moments of sober second thought to be an accident.

His logic, of course, is that you will no longer get the carbon tax rebate money if the tax is clawed back.

Yes, Minister. That’s the whole point. Canadians would get to keep more of their own money.

The Parliamentary Budget Office confirmed earlier this year that most Canadians owe more than they ever get back in carbon taxes. So instead of putting cash into the carbon tax machine, hearing it buzz, churn, strain, and then spit out a cheque back at me – here’s an idea – you could just make gas more affordable at the pump.

And we know that method works.

It was because provinces like Ontario and Alberta cutting their taxes that gas prices dropped, and because of that – Canada’s inflation rate has gone down for two months in a row now.

But anyone with any idea of how the economy works wasn’t surprised. The carbon tax drives up the price of gas and heating liquids – that’s its singular purpose. As a result, it then drives up the price of everything that requires oil and gas to make, refine, store, or transport goods across our great big country.

It is the epitome of the elitist and outdated ideology coming from the eco-radical wing of the government. The golden calf of “ban, block, tax and shut down” hasn’t worked. Global emissions are only going up. And the demand for energy is going up with it.

What Canada should be doing is promoting and supporting our energy industry by getting liquified natural gas to world markets that that are begging us for it, getting countries off burning coal and wood and dung, and helping our allies who are now going bankrupt paying for the energy produced by windmills.

Add to that Canada investing in carbon technologies to make it as low emissions as possible and you’ve got a world-class solution that fixes a lot of problems.

Instead, we’re stuck with carbon taxes, which do nothing but punish people for living their lives, and a government sitting on its hands, handcuffed to a divisive eco-radical agenda.

But for Guilbeault and Trudeau, it seems they don’t care. They get to pretend to be climate heroes while clutching their pearls at anyone who dissents from their view.

They know how much money they’re taking in from the carbon tax, and don’t want to give it up.

With the ongoing and worsening cost-of-living crisis crushing low and middle-income Canadians – something is going to have to give. Let’s just hope it’s the divisive and archaic ideology of Trudeau and Guilbeault – and not Canadian families.