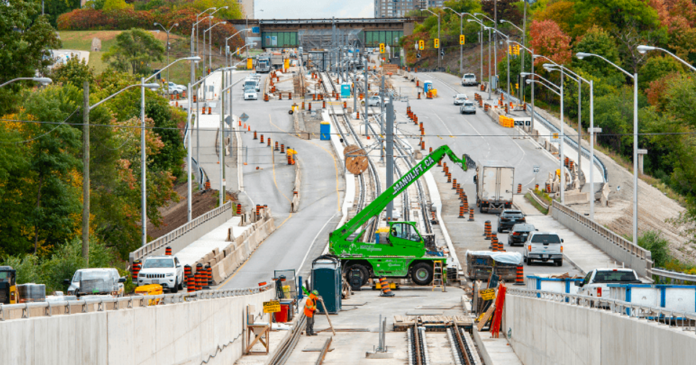 It seems accountability in Canada from all levels of government is at an all-time low.

In fact, the prevailing laissez-faire attitude in the country’s public sector has resulted in financial rewards for a job not done and a culture that shirks any and all responsibility for the notion of on-time delivery.

The best example of this has run through my own Toronto neighbourhood for the past 11-plus years.

The $9.1 billion Eglinton-Crosstown LRT build is fast earning the distinction of being another white elephant like the Boston “Big Dig.”

The Boston tunnel project, labelled the most expensive in North America, went 190% over budget and finished nine years behind its target completion date of 1998.

The 19-kilometre Eglinton-Crosstown, already two years behind, was supposed to be completed this fall.

But I was not the least bit surprised to learn this past week that it is delayed yet again, for the third time, by as much as a year.

The project is allegedly being managed by Metrolinx and built by a consortium headed by Crosslinx Transit Solutions.

I say allegedly because there appears to be no oversight by this grossly overstaffed, bureaucratic government agency.

In 2020, when CEO Phil Verster’s contract was renewed, the Doug Ford government gave him a 46% increase (certainly not for a job well done.) Last year, according to the Ontario Sunshine list, he made a scandalous $838,960.

I’m sure that’s a great comfort to the number of businesses who’ve gone under due to Metrolinx’s mismanagement.

Crosslinx is an even bigger joke. At a heated town meeting four years ago, its president Bill Henry told an exasperated crowd they could expect to see Eglinton Ave. cleared of all construction paraphernalia by the end of 2019.

Too bad his salary doesn’t depend on deliverables like that.

Metrolinx officials have repeatedly indicated that the project is still on budget. I’ve come to realize that only means the consortium built in all kinds of cost contingencies for delays and the lack of work imperative.

The excuses given for the delays have ranged from Covid and legal issues to the latest – Crosslinx is having trouble digging under key stations with an existing subway, most especially Yonge and Eglinton.

In early July, Metrolinx spokesman James Wattie told me that “by the end of the summer” road restoration and landscaping will be finished and “there will be new wider sidewalks, street furniture and bike lanes.”

Really? Perhaps he was referring to a project in another city.

Living close to the construction has afforded me a window into the sheer inefficiency of the build. We have endured road closures, continuous detours, unsafe road configurations and huge trucks rumbling down our street together with speeding cars for 11-plus years.

We continually see employees of various subcontractors standing on the job site looking at their phones or drinking coffee. Some even sit in their cars taking up precious parking spots on our street watching videos on their phones.

In September alone, I had three flat tires as a result of the terrible condition of the roads – two on my car and one on my bike.

The station job site – which has made a complete mess of our neighbourhood – is never manned beyond 4 p.m. each day and certainly not on weekends or holidays.

The station is one of 25 being built along the line. The endless construction has completely changed the fabric of the neighbourhood as I’ve watched store after store go out of business and others completely hidden by construction hoarding and barely passable sidewalks.

As is regularly the case, our municipal and provincial politicians have been virtually silent about the boondoggle, only piping up to try to score political Brownie points when another delay is announced.

For his part, Mayor John Tory issued a recent statement indicating he’d be reaching out to Metrolinx to convey his “frustration” with the length of the project – as if that will do any good whatsoever.

It’s as if this lack of work ethic and accountability is perfectly acceptable and that those responsible could care less.

In a September 23 statement on the Metrolinx website, Verster claimed they’re doing everything they can to hold Crosslinx accountable and get the work done quickly.

A flyer delivered to our home this week from Metrolinx claims they’ll be closing the major north-south intersection near our street (yet again) to conduct “permanent utility installations and road and sidewalk restoration.”

The flyer says it may be a month.

The construction will end at 5 p.m. each day, the flyer says and the closure “may be longer or shorter than expected.”

“Construction may not take place each day of the closure period,” the flyer adds.

So much for Verster’s (ridiculous) claims of accountability and getting the job done quickly.

Still why should he care?

He gets an outrageous salary no matter what.