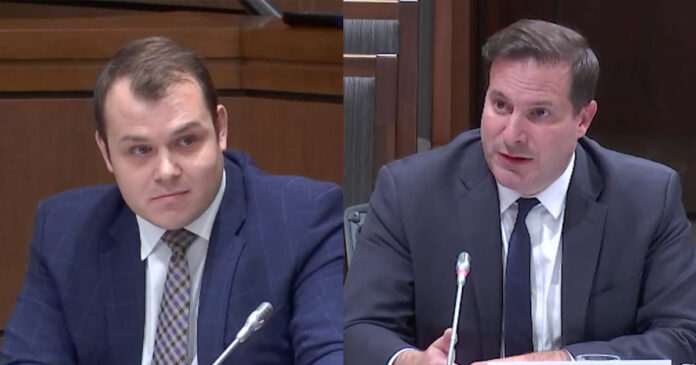 Dancho asked Mendicino why the government intended to “redirect police resources to the confiscation regime” while resources were already stretched.

According to the 2019 Liberal platform, the gun buyback program was estimated to cost anywhere from $400 million to $600 million whereas more recent estimates put the figure at nearly $5 billion.

Dancho asked why the government is looking to spend this money on the buyback program instead of using it to improve border services to prevent guns being smuggled in from the United States.

“We plan to be very transparent about the costing of the buyback program,” replied Mendicino. “There is no way to put a price on a life lost and all you have to do is look into the eyes of any of the families who have lost somebody to an assault-style rifle.”

“As a firearms owner, we undergo rigorous licensing processes, we’re trained, tested, and vetted, would you agree?” asked Dancho. Mendicino replied that he has respect for law-abiding gun owners and that “they place safety as a premium value.”

Mendicino dodged the question by explaining how the government has initiated a ban on handguns entering the country. Lloyd accused Mendicino of “dancing around the question.”

“We’ve taken a concrete and tangible step forward to addressing handgun violence through the introduction of a national handgun freeze.” said Mendicino.

“Would you agree that it would be more beneficial to buy back an illegal firearm off the street, rather than buying back a firearm from a sport shooter in Barrie, Ontario?” asked Lloyd.

“Well, you and I disagree about that.” replied Mendicino.

Alberta announced in September that it would not aid the Trudeau Liberals in confiscating the roughly 30,000 firearms currently registered in the province that are affected by the ban. The province told the Alberta RCMP that the so-called buyback program is not a provincial priority and is therefore an inappropriate use of police resources.

The Trudeau Liberals are attempting to pass legislation to further restrict the Canadian firearms market with the tabled Bill C-21.

C-21 seeks to allow the police to seize a person’s firearms at the behest of someone asking a judge to issue an emergency order (red flag laws), effectively ban the sale of handguns and more.