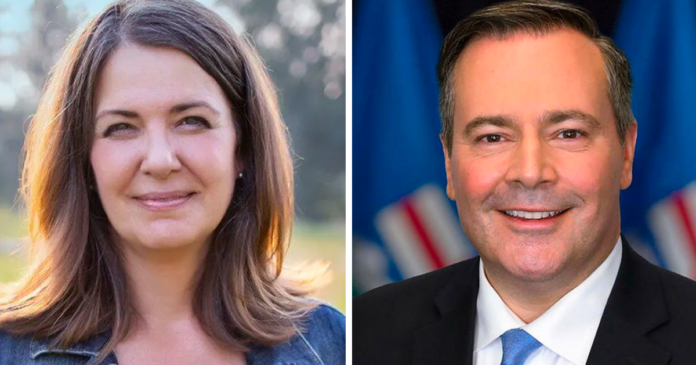 Premier-designate Danielle Smith said she might take a closer look at some of the funding announcements Jason Kenney made in his final days in the province’s top job.

Kenney pledged over $160 million in his final week as premier, including $73 million for a partnership with the aviation sector and Westjet.

In an interview with True North on Friday, Smith said her staff flagged some items that require closer examination.

“My chief of staff did flag that some of them might be ones that we would have to consider, but most of them are fairly straightforward, ” she said.

“As long as those are consistent with what our member pass policy has said, which is campaign platform and with the commitments that he’s made, I would think he’s just wrapping up some of those events.”

The Canadian Taxpayers Federation (CTF) said Alberta is still more than $132 billion in debt and now is not the time “to throw a kegger and start spending.”

“The next premier needs to tap the breaks on spending, because if we don’t, we will never be able to hold up the ‘Paid In Full’ sign again,” Kris Sims, Alberta Director for the CTF told True North hours ahead of the leadership vote which elected Danielle Smith.

Here’s a look at all the funding announcements Kenney made in his final days in office.

On Sunday, the Alberta government committed $20.8 million in new funds over the next four years to step up the fight against human trafficking.  The funding follows five recommendations from the Alberta Human Trafficking Task Force to “better protect and assist vulnerable Albertans and stop their exploitation at the hands of traffickers.”

The government on Monday pledged an additional $11 million this year for an action plan to reduce wait times for CT and MRI scans. That’s on top of a $33 million increase from last year.

On Tuesday, ministers awarded $2.06 million from the rural stream of the Investment and Growth Fund to Southland Trailer Corp. The “family-run business” will double its production and create 250 jobs as the first recipient of the rural funding stream, the government says.

The following day, another $17.5 million in funding for WinSport’s Frank King Day Lodge was announced. The facility was converted to a day lodge following the 1988 Calgary Olympics.

Another $10 million was announced for frontline humanitarian efforts in Ukraine, bringing Alberta’s total contributions to Ukraine relief to more than $23 million.

That same day, the province promised an investment of $15 million over the next three years to fund 12 new and existing community partnerships to strengthen support for apprenticeship and Alberta’s skilled trades.

And $1 million will be invested to launch a made-in-Alberta forensic evidence collection training program.

“This project will increase the number of health-care providers in rural areas that are trained in providing sexual assault evidence kits,” says a government release.

On Wednesday, Alberta’s government announced investments of $260,000 in “Period Promise” which they say will  improve menstrual care and provide period products to “youth” in need.

Meanwhile, an investment of $6 million over the next three years will support up to 1,200 more work-integrated learning participants. The government says the funding will allow additional industry associations to deliver the Work-integrated Learning Industry Voucher Expansion program, which helps fund paid work placements in Alberta’s key priority sectors.

The province also promised almost $5 million to targeted employment support and services for employers and Albertans with disabilities. Another $7 million will go to employment initiatives and expand the Career and Employment Information Services.

That same day, $6 million was promised to 41 successful Civil Society Fund applicants to support the “social recovery and economic participation of vulnerable Albertans.”

The government also committed around $73 million over a number of years toward the aviation and tourism industries in Alberta.

Of the commitment, $16 million was promised for annual and direct investments for WestJet and other players in the aviation sector. WestJet will double its capacity in Calgary in the next several years and  designate Calgary its exclusive global connecting hub through the partnership.

Mount Royal University’s pilot training program will receive $7.1 million in capital. A total of $1.06 million in operating funding will add an additional 40 seats to its aviation diploma program.

As part of the announcement, another $5-million investment annually over three years will flow to offset training costs in the aviation sector to support training for new jobs. The province is committing to a 737 simulator for its aviation training centre, which costs about $25 million in capital investment.

The province will also increase funding for Travel Alberta by  $10 million annually over five years, up from $6.5 million.

And on Thursday, Kenney’s final day as premier, the Alberta government announced $4 million to school authorities across the province to create new dual credit opportunities or enhance existing dual credit courses for the 2022-23 school year.

In a press conference to announce the funding, Kenney said the government lost nearly two weeks following the death of Queen Elizabeth II and they’ve had to move quickly in the days following. The government observed a ten day mourning period following the royal’s death in which they could not conduct non-essential business.

“We’re having  to make up for that period of time,” Kenney said. “But also, this announcement was just finalized in the last few days.”

The government will fund relocation of the Wanda School to the proposed Jeanne Lougheed Historic Park in Forestburg with a $275,000 grant.